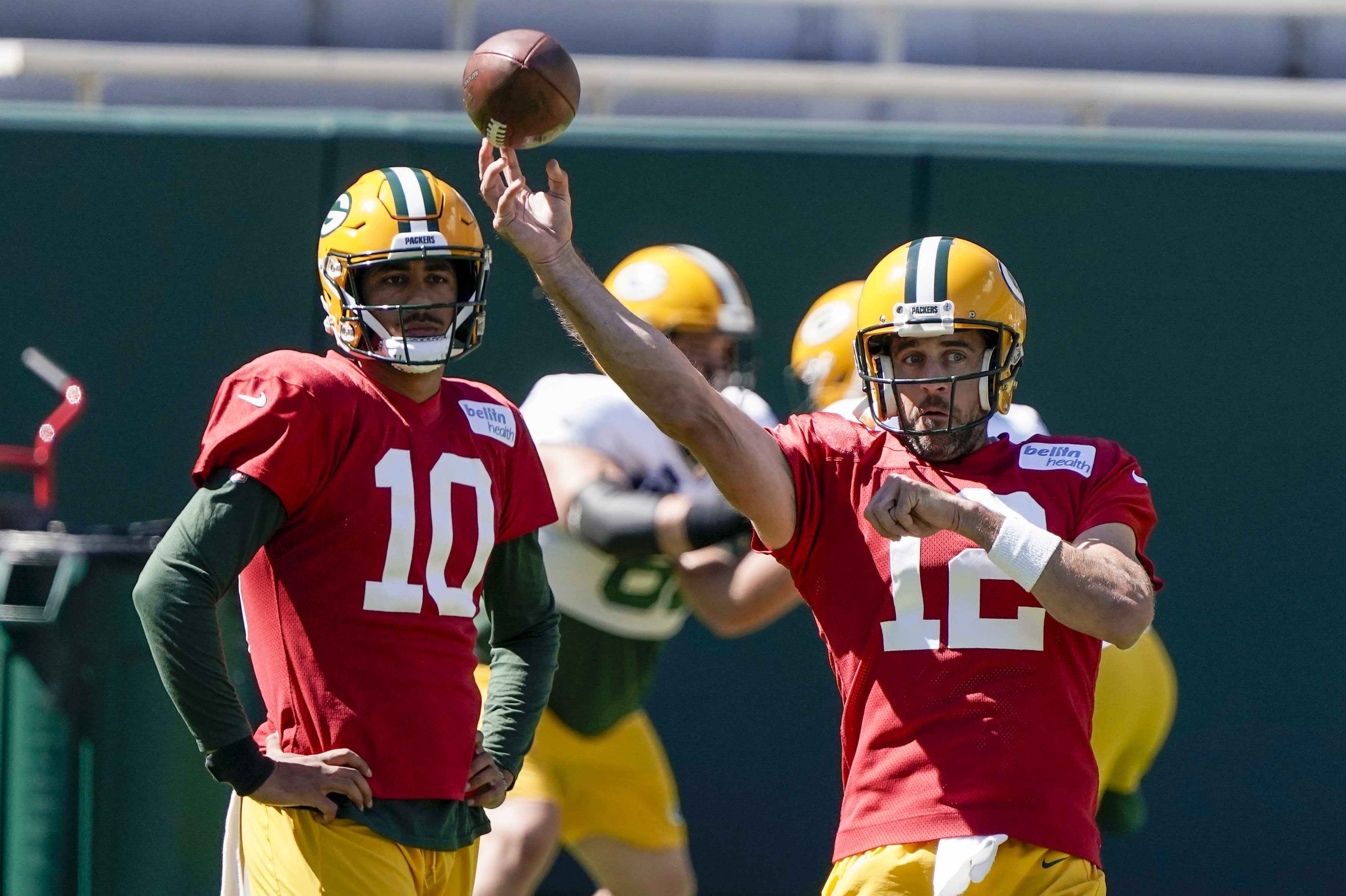 Shortly after Green Bay selected Utah State quarterback Jordan Love in the first round of the 2020 NFL draft, Packers coach Matt LaFleur made sure he caught up with Aaron Rodgers. He wanted to have “an honest conversation” with his starting QB.

Rodgers, after all, is a Packers icon and future Hall of Famer, a man whose reputation for making daredevil throws look routine is coupled with a reputation for being a fierce competitor who, like most of the greats, knows how to use slights as fuel. There was no shortage of dramatic speculation about how Love’s selection went over with Rodgers, especially since his eventual successor was drafted a few months after Rodgers led the Packers to the NFC championship game.

LaFleur says he wasn’t worried about all that. Instead, he just knows that as the Packers’ offensive play-caller, it’s important for him to maintain a good relationship with his quarterback.

“You have to have honest conversations that aren’t always the easiest conversations,” LaFleur told Yahoo Sports in a recent phone interview. “I will say this: I could not be more impressed with how Aaron’s handled this whole situation. You know, he came back and I can tell he’s put the work in throughout the course of the offseason. He’s playing at a really high level.”

And as good as Rodgers has been throughout camp, LaFleur added, he has been even better off the field with Love.

“I know everybody wants to make this out to be some kind of dramatic situation,” Packers general manager Brian Gutekunst recently told Yahoo Sports in a phone interview. “And it’s just not.”

A big reason that Gutekunst, the man who selected Love, can defuse concerns about the fit is because of Rodgers’ professionalism.

Drafted himself in 2005 to replace the great Brett Favre, Rodgers remembers what it was like to be thrown into a situation Love currently is in. Much has been made about Favre’s unwillingness to help Rodgers early in his career, and to be fair, it’s unreasonable to expect any veteran to mentor the player the organization is counting on to eventually take his job.

“I know it’s not his job or his responsibility,” LaFleur said, “but if you could see him in the meeting room, not only for Jordan but for Tim [Boyle] as well, he’s been an incredible mentor. I mean, he coaches those guys up. He gives them some finer details that, as coaches, you may not even think about from the player perspective. And it’s been awesome to see. He’s really taken both those guys and really helped them.”

Take the Packers’ first training camp practice in Lambeau, for instance, when Love got some red-zone reps against a defense that featured four-down linemen, with two linebackers on both sides of the center. Rodgers hit up Love with questions afterward.

“He really broke it down for him like, ‘Hey, what’s the thought process here? What if both those ’backers come? Where are you going with the ball?’” LaFleur recalled. “Just how detailed [he was] and how [he explained what] your thought process needs to be … it was a pretty cool moment, just being in there and listening to him coach up a young rookie that doesn’t have a ton of experience.”

Love is young — he turns 22 in November — and he’s raw, as he threw 17 interceptions as a redshirt junior at Utah State in 2019, a troubling tally considering the level of play. Still, Green Bay drafted him 26th overall, even trading up four spots and eschewing help at receiver and on defense to do so because of Love’s tantalizing combination of athleticism, arm strength and play-making ability.

“He is a very natural thrower, and I feel like his mechanics, his footwork, it has progressively gotten better on a daily basis,” LaFleur said.

In order to fully harness his talent, Love, like any young QB, needs reps. Those were always going to be in short supply, especially with Rodgers firmly entrenched as the starter. It also didn’t help that Love was robbed of practice reps this summer due to COVID-19. Nonetheless, it’s up to young NFL players to overcome adversity, and so far, Gutekunst says Love is approaching his task with the level of humility necessary to come out OK on the other side.

“When you come into a locker room as a young player, I think you kind of have to come in and understand how you fit,” Gutekunst said. “I do think Jordan’s the kind of person that understands the situation he’s coming into, where you have a Hall of Fame quarterback who’s at the top of his game right now. I think he’s ready to work and learn as much as he can and develop because the position that he plays is one that, you know, it doesn’t happen overnight.

Indeed. Love has earned uneven reviews from the Green Bay media corps, which has repeatedly noted his tendency to look tentative with every pass. When asked about those observations, LaFleur chalked it up to a young quarterback who needs to let it rip so he can execute the passing concepts that are new to him with confidence.

“He has it all in the meeting room, now it’s just taking it from the meeting room to the field,” LaFleur said. “He’s working hard, he’s talented, I just think the more that you’re thinking at that position, the less decisive you’re going to be. I just told him, ‘Hey, you can’t be afraid to make a mistake.’ We’ve got a saying — indecisive equals ineffective, so whatever he sees, I want him to trust it and, like you said, just let it rip. And if you make a mistake, you’ve got to learn from it.”

It appears Love will get that luxury, as he broke camp third on the Packers’ depth chart behind Rodgers and Boyle, a three-year veteran.

LaFleur’s first season as the Packers’ head coach last year was a rousing success as the Packers went from 6-9-1 to 13-3. Yet, their loss in the NFC title game to the ground-and-pound San Francisco 49ers revealed critical flaws they could have addressed with the first-round pick they used on Love, and the second-round selection they used on powerhouse running back A.J. Dillon, who will likely take a backseat to starter Aaron Jones for at least one season.

Rather than reach on a player he wasn’t in love with at a position of need like receiver, Gutekunst, a disciple of Hall of Fame general manager Ron Wolf, stayed true to his board in an attempt to keep the Packers relevant for another decade-plus.

“We’ve been really fortunate around here to win a lot of games in the last 25 years for a lot of reasons,” Gutekunst said. “But the two main consistencies we’ve had is two Hall of Famers at quarterback during that period of time.

“We just understand the importance of that position.”

Still, the Packers’ patience does not give Love license to throttle down. This is the NFL, which means everybody’s under pressure. Love was drafted to one day be the Packers’ starter, and the harder he prepares for it now, the more ready he’ll be for his moment — whenever it comes.

“I never want him, or any quarterback or any player for that matter, to think that you have a redshirt year,” LaFleur said. “This is a brutal business that expects results and there’s no time for that. You’ve got to attack it because football is a high-impact game where things happen and you may be one play away from having to go in there.”

Mindfulness and meditation can worsen depression and anxiety

Cantona to Ronaldo, Beckham to Cavani – A history of Man Utd’s No.7s

MATCHDAY: Juventus has chance for 8-point lead in Italy

US records a coronavirus death every minute as toll tops 150,000

$2,000 Stimulus Checks Coming Soon? Why Some Americans Won’t Give Up

Romantic trips and honeymoons with One&Only

Here’s What To Do To Stop Public Speaking Fear

YG Giving Away His $200 Sneakers to Recently Released Prisoners

Southdale crash sends one to hospital in unstable condition