Leading Western experts believed a lab leak was the ‘likely’ origin of Covid but were silenced because it could cause harm to Chinese scientists, bombshell emails show.

Sir Jeremy Farrar, who publicly denounced the theory as a ‘conspiracy’, admitted in a private email in February 2020 that a ‘likely explanation’ was that the virus was man-made.

The then-UK Government adviser said at the time he was ’70:30 or 60:40′ in favour of an accidental release versus natural origin.

In the email, sent to American health chiefs Dr Anthony Fauci and Dr Francis Collins, Sir Jeremy said it was possible Covid had been evolved from a Sars-like virus in the lab. He went on that this seemingly benign process may have ‘accidentally created a virus primed for rapid transmission between humans’.

But the British scientist was shut down by his counterparts in the US who warned further debate about the origins of the virus could damage ‘international harmony’.

He was told by other scientists with links to virus manipulation research that it could cause ‘unnecessary harm to science in general and science in China in particular’.

Sir Jeremy claimed in his emails that other respected scientists also believed the virus could not have emerged naturally. Names included Professor Mike Farzan, the Harvard researcher who first discovered how the original Sars virus binds to human cells.

Despite his concerns, Sir Jeremy went on to sign letters in The Lancet a fortnight later denouncing anyone who believed in the lab leak theory as bigoted.

Critics slammed the ‘lack of openness and transparency’ and accused Western scientists of shutting down debate about Covid’s origin for political reasons.

The new emails were only revealed after the US Republican House Oversight Committee were granted access to them yesterday after multiple appeals. Some information in the notes remains redacted. 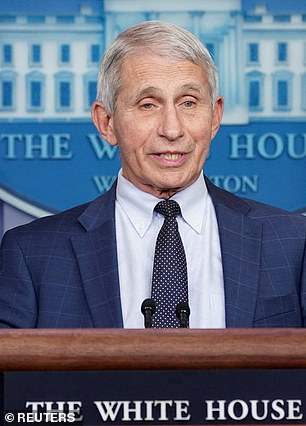 Sir Jeremy Farrar (right), director of the Welcome Trust, told US health chief Dr Anthony Fauci (left) in an email in February 2020 that a ‘likely explanation’ for the virus’ origins is that it evolved in human tissue in a lab 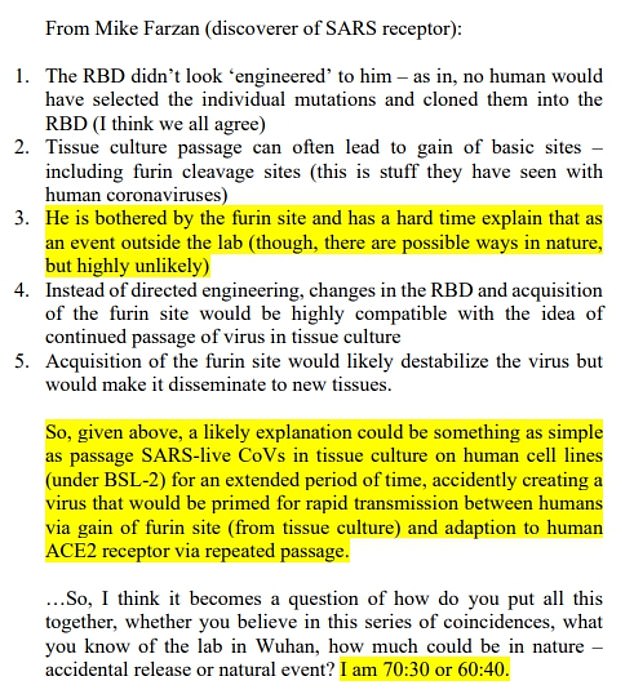 Other respected experts including Professor Mike Farzan, who first discovered how the original Sars virus binds to human cells, also claimed the virus could not have evolved naturally, according to Sir Jeremy’s email 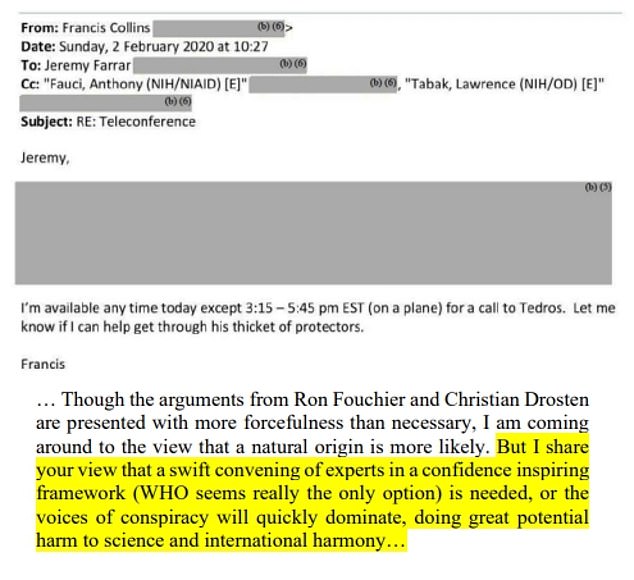 Dr Francis Collins, the US National Institutes of Health director at the time, hit back at the claims immediately, claiming entertaining the theory would allow ‘the voices of conspiracy [to] quickly dominate’ 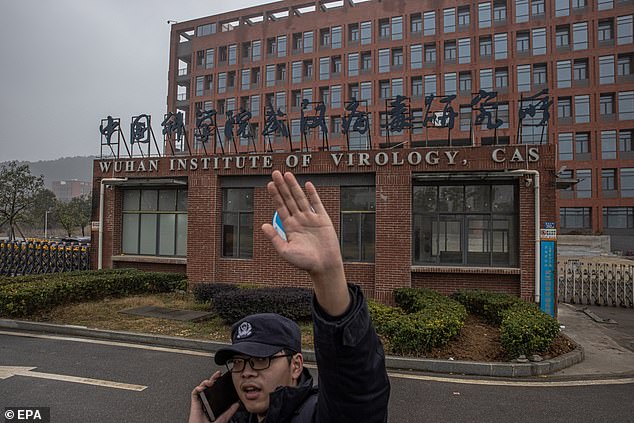 Pictured: The Wuhan Institute of Virology, where some believe the virus may have been accidentally leaked from

Who is Dr Ron Fouchier? Lab leak theory denier whose bird flu studies were banned in the US for spreading virus to mammals 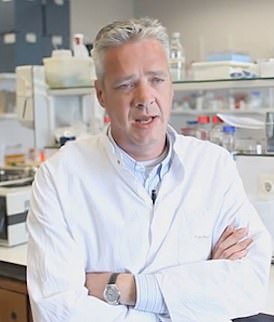 Dr Ron Fouchier of Erasmus University Medical Center in Rotterdam, the Netherlands, manipulated the H5N1 bird flu strain to be able to jump between ferrets in 2011

One of the Western scientists who silenced Sir Jeremy’s email warning of Covid’s ‘likely’ unnatural origins has been involved in controversial gain of function research.

Dr Ron Fouchier of Erasmus University Medical Center in Rotterdam, the Netherlands, manipulated the H5N1 bird flu strain to be able to jump between ferrets in 2011.

The strain is currently wreaking havoc on Europe’s bird and mammal populations and infected the first British human ever last week.

His study — co-authored by Professor Yoshihiro Kawaoka, a virologist at the University of Wisconsin in Madison and the University of Tokyo — raised fears the virus would be better equipped to jump to humans at the time.

It was initially banned from being published, before later appearing in a peer-reviewed journal.

However, US officials shut down gain of function research in 2014, immediately calling off funding for 18 proposed studies on SARS, MERS and influenza.

In Sir Jeremy’s initial email, he revealed his and other experts’ main suspicions centred around Covid’s unique furin cleavage site — the part of the spike protein which makes it so efficient at infecting human cells.

The email, sent on February 2 when the first Covid death outside of China was confirmed, continued: ‘[Professor Farzan] is bothered by the furin site and has a hard time [to] explain that as an event outside the lab, though there are possible ways in nature but highly unlikely.

‘I think this becomes a question of how do you put all this together, whether you believe in this series of coincidences, what you know of the lab in Wuhan, how much could be in nature — accidental release or natural event? I am 70:30 or 60:40.’

Professor Eddie Holmes, from the University of Sydney, said he believed there was a 60:40 chance of a lab leak.

In total, a dozen scientists in the UK, US and Europe — including Britain’s chief scientific adviser Sir Patrick Vallance — were included in the email chains in the first week of February.

Dr Andrew Rambaut, an evolutionary biologist at the University of Edinburgh, responded: ‘From a (natural) evolutionary point of view the only thing here that strikes me as unusual is the furin cleavage site.’

Professor Bob Garry, also from the University of Texas, said he could not ‘figure out how this gets accomplished in nature’.

But those within the email chain who had concerns were met with push back.

Dr Collins — the former head of the influential US National Institutes of Health — warned that going public with their reservations could be damaging.

He wrote to Sir Jeremy in an email: ‘I share your view that a swift convening of experts in a confidence-inspiring framework is needed or the voices of conspiracy will quickly dominate, doing great potential harm to science and international harmony.’

Other western scientists — some of whom were involved in other controversial virus manipulation research — tried to silence the concerns immediately.

In an email to scientists whose names have been redacted in the email chain, Dutch scientist Dr Ron Fouchier, of Erasmus University, said: ‘Further debate about such accusations would unnecessarily distract top researchers from their active duties and do unnecessary harm to science in general and science in China in particular.’

Dr Fouchier previously led so-called ‘gain of function studies’ in the US on H5N1 bird flu in — the strain that is currently wreaking havoc on Europe’s bird and mammal populations, and infected the first British human ever last week.

His studies manipulated the strain so that it could successfully jump between ferrets in 2011.

Viscount Ridley, co-author of Viral: the search for the origin of Covid, told the Daily Telegraph: ‘These emails show a lamentable lack of openness and transparency among Western scientists who appear to have been more interested in shutting down a hypothesis they thought was very plausible, for political reasons.’ 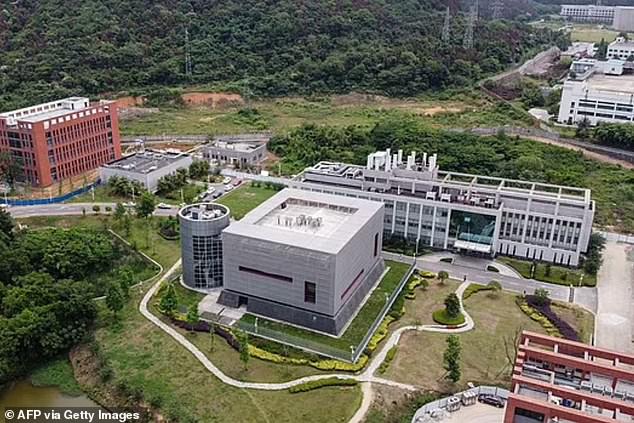 A May 2021 report from The Wall Street Journal cited an undisclosed intelligence report detailing how three scientists from China’s Wuhan Institute of Virology sought hospital care in November 2019, months before China disclosed the outbreak 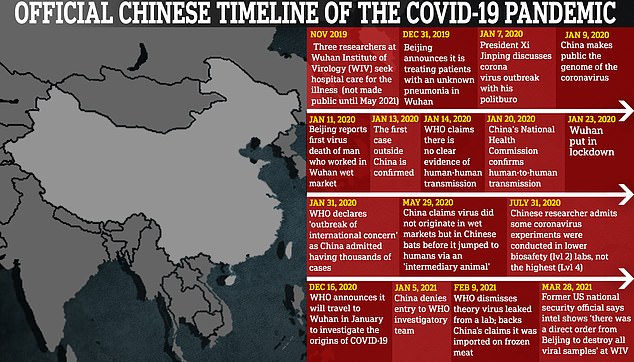 Sir Jeremy said his view changed in line with the evidence at the time, with clear studies pointing towards Covid’s natural origin from March 2020.

He said there can be no place for unsubstantiated rumour but it is important to remain open-minded, as there may be other possibilities.

Dr Farrar told MailOnline: ‘It is important that we understand how all pathogens emerge so that we can prevent future pandemics.

‘In my view, the scientific evidence continues to point to SARS-CoV-2 crossing from animals to humans as the most likely scenario.

‘However, as the efforts to gather evidence continue, it is important to stay open-minded and work together internationally to understand the emergence of Covid and variant strains – to end this pandemic and reduce the risks of future events.’

It comes after Dr Richard Horton, editor of The Lancet, admitted it took 16 months to publish an official conflict of interest statement in which he revealed Dr Daszak had links to the Wuhan laboratory at the centre of the spillover theory.

Dr Daszak organised the original letter signed by Sir Jeremy later in February 2020, co-signed by 26 other leading researchers which condemned ‘conspiracy theories’ that Covid did not arise naturally.

The move is also claimed to have shut down any debate over whether the virus could have escaped from a lab last year.

But the zoologist, a Lancastrian who now lives in New York, had ties to Wuhan Institute of Virology stretching back 15 years.

During a grilling from MPs on the Science and Technology Select Committee in December, Dr Horton was forced to defend the 16-month delay before Dr Daszak’s important conflicts of interest were finally published in a memorandum in the journal this June.

For some Greenlanders, eating sugar is healthy — ScienceDaily

Coronavirus England: 85 people A DAY may die until end of July

A GoPro for beetles: Researchers create a robotic camera backpack for insects

Medical Freedom Has Been Hijacked

35 romantic breaks in the UK and Ireland

The Case Against Price Controls

Journalist goes viral for continuing to report after on-air accident