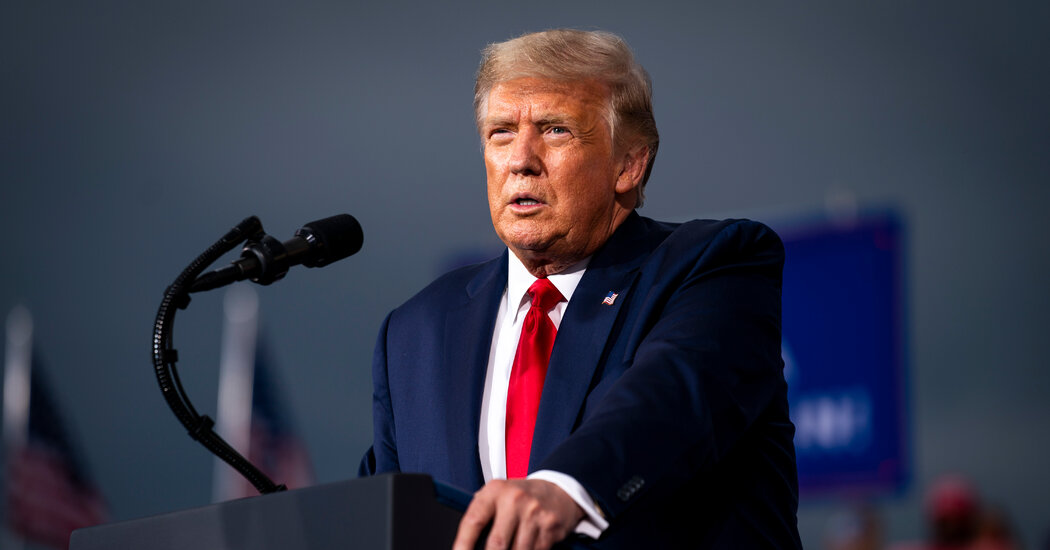 President Trump acknowledged to the journalist Bob Woodward that he knowingly played down the coronavirus earlier this year even though he was aware it was life-threatening and vastly more serious than the seasonal flu.

“This is deadly stuff,” Mr. Trump said on Feb. 7 in one of 18 interviews with Mr. Woodward for his coming book, “Rage.”

“You just breathe the air and that’s how it’s passed,” the president told Mr. Woodward in audio recordings made available on The Washington Post website. “And so that’s a very tricky one. That’s a very delicate one. It’s also more deadly than even your strenuous flus.”

But three days after those remarks, Mr. Trump told the Fox Business anchor Trish Regan: “We’re in very good shape. We have 11 cases. And most of them are getting better very rapidly. I think they will all be better.” A little less than two weeks later, he told reporters on the South Lawn that “we have it very much under control in this country.”

By Feb. 26, the president was publicly dismissing concerns about the lethality of the virus. “It’s a little like the regular flu that we have flu shots for,” he said at a White House news conference. “And we’ll essentially have a flu shot for this in a fairly quick manner.”

And by Feb. 28, at a rally in South Carolina, Mr. Trump denounced Democrats for their concerns about the virus as “their new hoax,” after the Russia investigation and his impeachment.

The audio recordings show that as Mr. Trump was absorbing in real time the information he was given by health and national security experts, he made a conscious choice not only to mislead the public but also to actively pressure governors to reopen states before his own government guidelines said they were ready.

By March, Mr. Trump was straightforward with Mr. Woodward about his tactics. “I wanted to always play it down,” the president said in an audio recording of an interview on March 19. “I still like playing it down, because I don’t want to create a panic.”

“This is deadly stuff,” the president repeated for emphasis.

Despite the president’s own words in the recordings, the White House press secretary, Kayleigh McEnany, told reporters on Wednesday that Mr. Trump had never publicly played down the virus.

The Post and CNN were given advance copies of the book and published details on Wednesday. The New York Times obtained its own copy.

As part of the White House’s effort at damage control, Mr. Trump told reporters that his recorded remarks to Mr. Woodward were vastly different from what he was telling the public because he was worried about frightening people.

“We don’t want to instill panic,” the president said on Wednesday. “We don’t want to jump up and down and start shouting that we have a problem that is a tremendous problem” and “scare everybody.”

But his acknowledgment that he was fully aware by early February of the perils of the virus only intensified questions about why he was so slow to respond, and why he did not tell Americans the truth to better prepare them for the worst public health crisis in the United States in more than a century.

Mr. Woodward’s book also illustrated that as much as Mr. Trump tries to change the subject before the November election to law and order and a call for a crackdown on nationwide protests against police brutality, he is unable to escape scrutiny for his response to a virus that has killed nearly 190,000 people in the United States and upended the lives of millions more.

The president also told Mr. Woodward on March 19 of the virus: “Part of it is the mystery. Part it is the viciousness. You know when it attacks it attacks the lungs. And I don’t know — when people get hit, when they get hit, and now it’s turning out it’s not just old people, Bob.” He went on: “Just today and yesterday, some startling facts came out. It’s not just old, older. Young people too — plenty of young people.”

And yet in an interview broadcast by “Fox and Friends” on Aug. 5, Mr. Trump asserted: “If you look at children, children are almost, and I would say almost definitely, but almost immune from this disease. I don’t know how you feel about it, but they’ve got stronger immune systems than we do somehow for this.”

Two days later, the Centers for Disease Control and Prevention reported that “children are at risk for severe Covid-19.”

One question swirling in Washington on Wednesday was why Mr. Trump had given Mr. Woodward such extensive access. Mr. Woodward, a longtime editor and reporter at The Washington Post who with Carl Bernstein broke the Watergate scandal that led to the resignation of President Richard M. Nixon, has written books on most of Mr. Nixon’s successors, many of them critical. Karl Rove, President George W. Bush’s former top political adviser, noted on Fox News on Wednesday that nearly every president who has cooperated with Mr. Woodward regretted it.

Current White House officials said that Mr. Trump opened his door to Mr. Woodward in the hope that the eventual book would be positive. Mr. Trump did not speak to Mr. Woodward for his first book on the Trump presidency, “Fear,” and the president has maintained that it would have turned out better had he participated. Officials also said that Mr. Trump, who has great faith in his ability to sell people on his version of events, was eager to have Mr. Woodward’s seal on his time in office.

Although Mr. Trump and his son-in-law and senior adviser, Jared Kushner, spoke extensively to Mr. Woodward, White House officials were pointing fingers at one another on Wednesday about who was responsible for giving the journalist such access.

Speaking to reporters on Wednesday afternoon, Mr. Trump repeatedly bragged about his limited ban on travel into the United States from China at the end of January, and falsely claimed that almost everyone disagreed with him at the time. Mr. Woodward’s book documents that the majority of the president’s advisers urged him to go ahead with the ban during a meeting in the Oval Office before he ultimately did.

When pressed on why he did not do more in February and March, knowing what he knew, Mr. Trump maintained that he had not expected the virus to spread as far and as fast as it did.

“I don’t think he needs to go on TV and scream that we’re all going to die,” said Senator Lindsey Graham, Republican of South Carolina and an ally of the president who White House aides said encouraged the president to participate in the book. “But his actions of shutting the economy down were the right actions. I think the tone during that time sort of spoke for itself. People knew it was serious.”

Senator Mitch McConnell of Kentucky, the majority leader, said he had not seen the book and directed questions to the White House.

Democrats were quick to slam Mr. Trump for his comments. Senator Chuck Schumer of New York, the minority leader, said that the book offered “damning proof that Donald Trump lied and people died.”

“Wrong!” – Trump Blasts Fauci For Claiming US is Seeing Surge in Covid Cases Because…

Why no-code tools in startups should remain niche