Trump, Calling Himself ‘the No. 1 Environmental President,’ Green Washes His Record 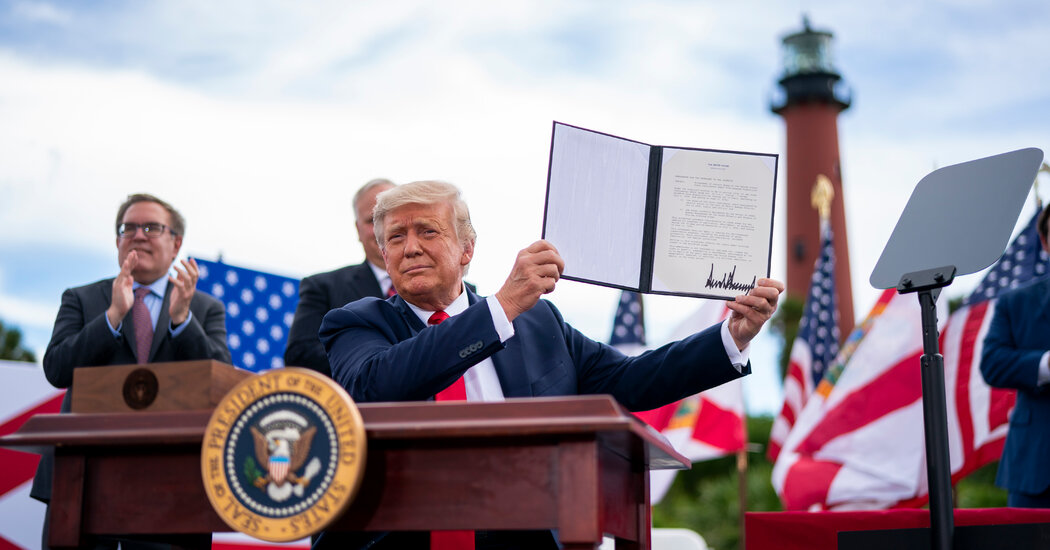 WASHINGTON — President Trump, who has vowed to exit the Paris Agreement on climate change, loosened restrictions on toxic air pollution, rolled back clean water protections and removed climate change from a list of national security threats, stood in front of supporters in Jupiter, Fla., on Tuesday and declared himself “a great environmentalist.”

Mr. Trump was speaking at an official presidential event, where he endorsed a 10-year moratorium on oil and gas drilling off the state’s coastline as well as the Georgia and South Carolina coasts — a feat of political jujitsu, since his administration is the one that proposed lifting the moratorium.

(In 2018, the Trump administration dropped only Florida from a list of places where it wanted to lift a moratorium on virtually all offshore oil drilling after strong opposition from Rick Scott, the state’s Republican governor at the time.)

But the president’s appearance in the battleground state he has adopted as his own, where recent polls show him deadlocked with his Democratic rival, Joseph R. Biden Jr., also doubled as a campaign stop where his campaign advisers say he must win. It was an extraordinary attempt to recast his environmental record in a state battered by hurricanes and coastal flooding, where voters from both parties express widespread concern about climate change.

Standing behind a podium with a presidential seal, Mr. Trump claimed, with no evidence, that electing Mr. Biden would leave the environment “permanently injured.”

“The left’s agenda isn’t about protecting the environment,” he said. “It is about punishing America.”

There are few other policy arenas where a rewrite of the past three and a half years could be so jarring. Mr. Trump’s portrayal of his administration’s response to the coronavirus pandemic has often strained credulity. His claims of a legislative record second to no other president have raised eyebrows. He has repeatedly made the unbelievable assertion that he has done more for Black Americans than any president, except perhaps Abraham Lincoln.

But the environment is in a category of its own, because in claiming the mantle of environmentalism, Mr. Trump is in fact repudiating one of his administration’s undeniable policy accomplishments: the stunning rollback in less than four years of environmental regulations that go back decades, including not just Obama-era climate change rules but even the National Environmental Policy Act, a bedrock law signed 50 years ago, which he has moved to unilaterally weaken.

The president has called climate change a hoax, weakened oversight of drilling in federal waters, opened up the Arctic National Wildlife Refuge to oil and gas companies and moved to repeal about 100 environmental regulations.

Yet on Tuesday, he congratulated his administration for what he called “our incredible record of natural conservation and environmental protection.”

Offshore drilling is deeply unpopular in Florida, where communities worry that the industry could hurt tourism along the state’s pristine beaches. A number of Republican leaders, including the Florida’s two senators and governor, lauded the announcement.

But Mr. Trump’s event and inaccurate claims about his record drew swift condemnation from environmental groups, as well as Mr. Biden.

“Failing to adequately fund Everglades restoration, attempting to sell off our waters to corporate polluters and rolling back more than 100 environmental protections doesn’t make you anything other than the worst president ever for the environment and climate,” said Ariel Hayes, the political director of the Sierra Club. “Voters in Florida and across the country have watched Trump achieve this status for nearly four years, and no amount of greenhouse gaslighting will change that.”

Mr. Biden responded on Twitter, noting that he was consistent in his opposition to new offshore drilling. “Just months ago, Donald Trump was planning to allow oil and gas drilling off the coast of Florida,” he tweeted. “Now, with 56 days until the election, he conveniently says that he changed his mind. Unbelievable.”

Josh Stein, the attorney general of North Carolina, which also opposes drilling off its coast and has sued to block it, said he was concerned that the president was simply picking favorites in states with Republican governors. North Carolina is a key swing state, like Florida, but its Democratic governor is also up for re-election.

“There is no rational reason to have oil rigs off of the Outer Banks but not off of Palm Beach,” Mr. Stein said. “Tourism and fisheries generates billions of dollars in economic activity in North Carolina, just as it does in South Carolina, Georgia and Florida.”

Mr. Trump’s up-is-down claims about his environmental record — he touted himself as “the No. 1 environmental president since Teddy Roosevelt” — were the latest example of the gaslighting campaign he is running to win over voters in battleground states by trying to ignore or misrepresent his own record.

During the Republican National Convention last month, the president’s advisers featured more than a dozen Black speakers vouching for the president’s character. But there was little discussion of Black victims of police violence, nor was there any reckoning with the protests across the country all summer dealing with systematic racism in the United States.

In an effort to win just a few more percentage points with Black voters than the 8 percent he won four years ago, Mr. Trump has underscored his support for changes to the criminal justice system. His hope is that Black voters, as well as white suburban voters turned off by his incendiary racial language, will focus on the First Step Act on criminal justice while overlooking the rest of his record on race, advisers said.

The president last month signed into law the Great American Outdoors Act, a conservation bill that guarantees maximum annual funding for a federal program to acquire and preserve land for public use. On Tuesday, he pointed to that one bill, passed in large measure to bolster two endangered Republican senators, Steve Daines of Montana and Cory Gardner of Colorado, hoping to avoid a broader examination of his environmental record.

Mr. Trump also made inaccurate claims about his environmental achievements.

For instance, he said his administration was “strengthening standards to prevent vulnerable children from being exposed to lead and copper and drinking water, including in our schools.” But experts have said the Environmental Protection Agency’s new lead standards would actually slow the replacement of pipes and leave more children vulnerable to exposure.

And while the president promoted his extension of the offshore drilling moratorium, he assailed Mr. Biden’s promises to curtail some hydraulic fracturing, or fracking, a method of extracting natural gas that conservationists strongly oppose.

How to Update & Edit Saved Passwords in Safari Autofill on Mac

iOS 14: How to Use Back Tap on iPhone to Launch Apps, And Other Cool Tricks

Super Typhoon Goni, world’s most powerful storm in four years, smashes into the…

Trump Has Already Spent $1 Billion on His Re-Election

Kamala Harris DNC Speech: ‘There Is No Vaccine for Racism’

How to Customize Automatic Updates for iOS & iPadOS

Mark Hulbert: Beware of companies trying to sell you their stock

COVID-19 Survivors May Experience Loss of Brain Tissue, According to New Data

Team of the week: The stars from the latest round of Super League matches | Rugby…

10 Productivity Apps an Entrepreneur Will Use Every Day, Now on Sale During This…

Klopp ‘not overly frustrated’ by stalemate

Wow, So Demi Lovato’s Massive Engagement Ring From Max Ehrich Is Worth An…