United States President Donald Trump sought to claim the mantle of environmental steward on Tuesday as he announced an expansion of a ban on offshore drilling and highlighted conservation projects in Florida.

Trump spoke beside the Jupiter Inlet Lighthouse and Museum, lambasting Democrat Joe Biden’s agenda at the taxpayer-funded event. The trip comes as Trump steps up his travel to battleground states eight weeks before the election.

From Florida, he was headed for a campaign rally in North Carolina, another must-win state for his re-election.

Trump announced he was extending and expanding a ban on new offshore drilling sites off the Florida coast as well as the coasts of Georgia and South Carolina. The existing moratorium covers the Gulf of Mexico, and Trump said the new one would also cover the Atlantic coast – a significant political concern in coastal states like Florida.

“My administration’s proving every day that we can improve our environment while creating millions of high-paying jobs,” Trump said. He claimed Biden’s environmental plans would “destroy America’s middle class while giving a free pass to the world’s worst foreign polluters.”

The announcement could open the president up to charges of an election-year flip-flop given that he acted in January 2018 to vastly expand offshore drilling from the Atlantic to the Arctic oceans. His administration has overturned or weakened numerous regulations meant to protect air and water quality and lands essential for imperilled species.

Trump offered himself as the greatest environmental president since Theodore Roosevelt.

“Who would have thought. Trump is the great environmentalist?” the president said. “You hear that? That’s good, and I am. I am. I believe strongly in it.” 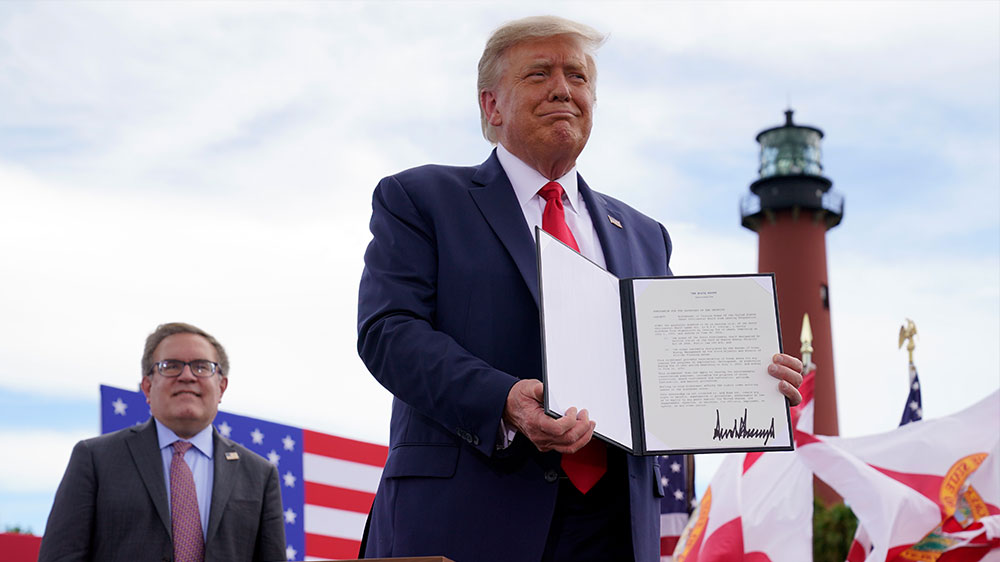 President Donald Trump holds a signed memorandum to expand the offshore drilling moratorium to the Atlantic coast of Florida, Georgia and South Carolina after speaking at the Jupiter Inlet Lighthouse and Museum in Florida. At left is Environmental Protection Agency Administrator Andrew Wheeler [Evan Vucci/AP Photo]

Trump, though, has rolled back numerous regulations meant to protect the environment, from power plant emissions to auto fuel standards to clean water. He withdrew the US from the 2015 Paris Agreement, a global accord to address the emission of heat-trapping greenhouse gases.

The Trump administration has made the environment a primary target of his deregulatory push, eliminating or weakening dozens of rules that protect the nation’s air and water quality and lands essential for imperilled species while reversing initiatives to fight climate change from the era of US President Barack Obama.

He lifted restrictions on oil and gas exploration in sensitive areas and shortened environmental reviews of construction projects such as highways and pipelines.

South Carolina Governor Henry McMaster, a longtime Trump ally who has opposed the administration’s drilling exploration expansion plans, applauded Tuesday’s announcement as “good news” but warned “we must remain vigilant in the conservation and preservation of our coastline”.

“South Carolina is blessed with the most beautiful and pristine beaches, sea islands, and marshes in the nation,” McMaster said. “Seismic testing and offshore drilling threatens their health and jeopardises the future of our state’s $ 24bn tourism industry.”

Soon after the initial expansion plans were floated early in Trump’s term, McMaster advocated against drilling and met with then-US Interior Secretary Ryan Zinke to seek an exemption for the state. McMaster has also signed into law a state budget proviso prohibiting state or local government funds from being used for offshore oil and gas-related activities. 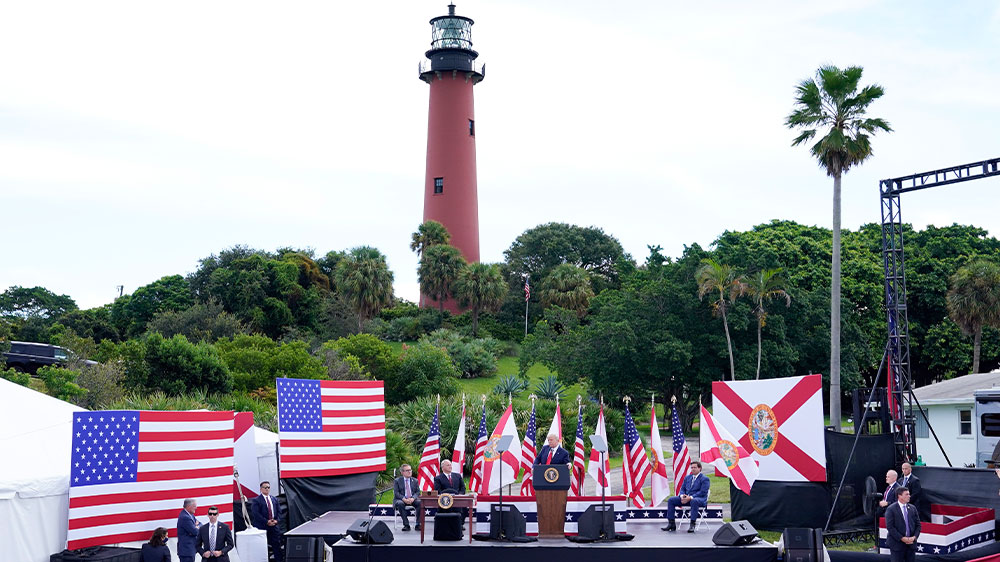 Trump said he had been discussing extending the moratorium with Florida Governor Ron DeSantis, who greeted Trump at the airport in West Palm Beach and attended the Jupiter, Florida event [John Raoux/AP Photo]

Trump said he had also been discussing extending the moratorium with Florida Governor Ron DeSantis, who greeted Trump at the airport in West Palm Beach and attended the event in Jupiter.

“This protects your beautiful gulf and your beautiful ocean, and it will for a long time to come,” Trump told an audience of about 200 people, including federal and state officials and members of Congress. Few wore face coverings or practised social distancing.

Wheeler contended Trump that had reined in an agency that had lost sight of its core mission. A second term would bring more clean-ups of Superfund toxic waste dumps and restoration of polluted industrial sites, which drew renewed emphasis during Trump’s first term, Wheeler said.

Twitter begins adding headlines and descriptions to some of its ‘trends’

Bettman says NHL could go with temporary realignment for next season

76ers must trade Ben Simmons to contend for title

US Government bans investment in Huawei and 58 other Chinese companies

Inside one of Australia’s super-strict coronavirus quarantine hotels

How to Change Default Web Browser on iPhone & iPad

U.S. Warns Russia, China and Iran Are Trying to Interfere in the Election. Democrats…