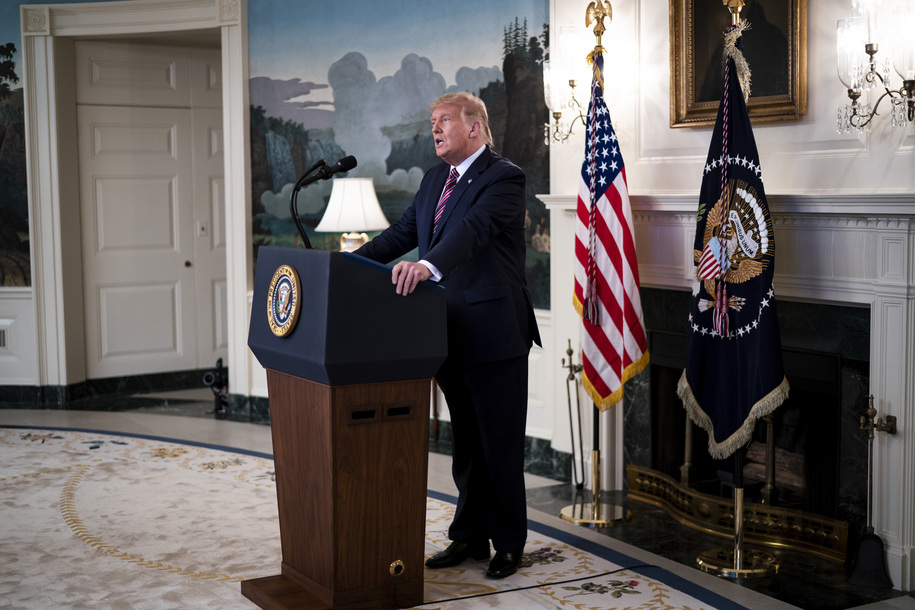 As Markos wrote Wednesday, “even if calling our fallen troops ‘losers’ and enlisted soldiers ‘suckers’ doesn’t erode his support, that was one week he spent defending himself rather than focusing a line of attack against Biden. And we have what, seven weeks left in this election? He’s about to spend another week defending himself.”

That means Trump not being able to devote his time and resources to negatively defining former Vice President Joe Biden—after Trump’s impeachable attempt to use the presidency to extort Ukraine into smearing Biden already failed, along with every other attack Trump has tried to use to drag Biden down. The clock is ticking for Trump and nothing is sticking to Biden.

Now, Trump has admitted he lied about COVID-19, saying “I don’t want to create panic, as you say. And certainly, I’m not going to drive this country or the world into a frenzy. We want to show confidence. We want to show strength.” But, as many observers have pointed out, the coronavirus is apparently the only thing Trump doesn’t want people frightened about.

The veterans-are-suckers story and the downplaying-coronavirus story also have in common that they make it clear that Trump thinks his own voters are suckers. If he privately thinks that U.S. troops and veterans are suckers, what does he think of you? If he thinks so little of your life that he held on to information about how very dangerous the coronavirus is even as people started dying, why would you think he’s going to start valuing your life now or at any point in the next four years? Nearly 200,000 people have been killed and Trump is still pressing to reopen faster, with less regard for safety.

Trump’s admission that he lied also came as he delivered a giant bribe to elected Republicans, and an attempt to distract Republican voters, in the form of saying that Sens. Tom Cotton, Ted Cruz, and Josh Hawley are all on his short list of future Supreme Court nominees. It was a blatant reminder to Republicans that they’ve decided that their deal with this particular devil is that he gives them far-right, partisan, lifetime judges and they ignore the adultery and the lying. But the fact that Trump felt he needed to deliver this reminder, elevating specific Republican senators, shows again the danger he knows the revelations about his early knowledge of the coronavirus threat, and his lies about it, poses to his already extremely endangered reelection.

Elected Republicans like Tom Cotton, Ted Cruz, and Josh Hawley are sticking by Trump, because they, too, care more about judges than they do about hundreds of thousands of lives. They have enabled him every step of the way, and they own every one of his misdeeds now. Including whatever turns out to be the next big story that comes up to distract us all from Trump having known how bad COVID-19 could be and lied to us about it, while refusing to take action to prevent its spread.

Users can now transfer WhatsApp chats from iPhone to Android

‘Space Crew’ will launch you into the spaceship management frontier Oct.…