Trump rejects safety concerns over indoor rally … because he’s safe, so forget everyone else 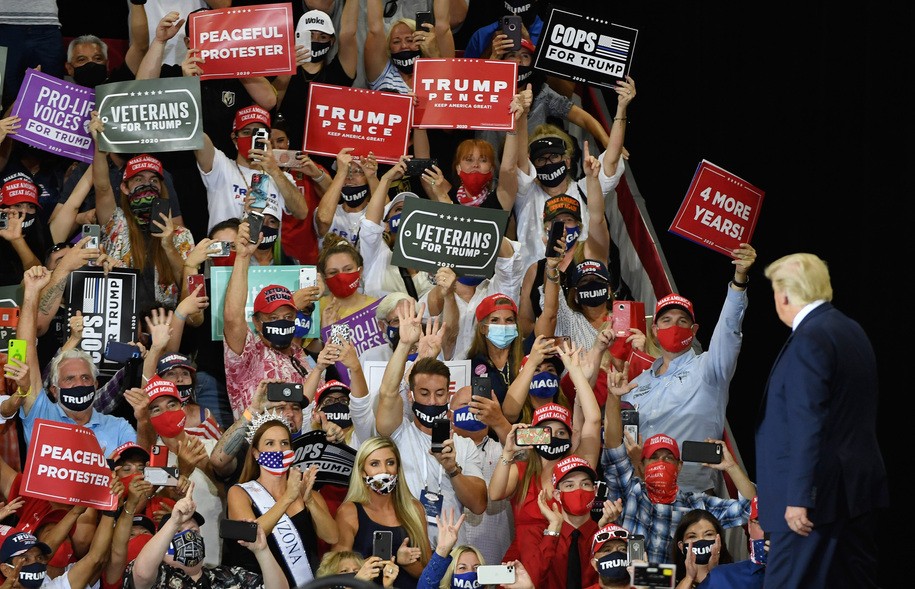 People in the crowd were not very far away from each other—actually, they were right next to each other, and many weren’t wearing masks. But screw the little people, Donald Trump himself is safe.

Former Republican presidential candidate Herman Cain died just over a month after attending Trump’s last indoor rally, in Tulsa, and Tulsa experienced a surge in COVID-19 cases three weeks after the rally. But all that matters to Donald Trump is Donald Trump.

But hey, many of Trump’s supporters aren’t worried about their own health, either, even though they are shoulder to shoulder in an indoor crowd. “This is our First Amendment, it’s my right to choose,” a 60-year-old Trump supporter told CNN. “This is not a dictatorship, this is a republic. And we have a right to be who we are and take whatever risks we so desire.” (Note: This is false, as many laws about vehicle safety remind us.)

Screw anyone else who comes into contact with Trump supporters who rallied indoors because, as another said, “if I catch Covid, that’s the consequences of my actions, so I’m willing to take that risk and have a good time today.” Screw the entire state of Nevada, which currently has an 8.5% positive test rate. Trump and his supporters are going to have their fun and they do not care about anyone else.

Trump also attacked Nevada Gov. Steve Sisolak at length in his Review-Journal interview, continuing to lie about Sisolak having personally intervened to block him from holding rallies at some locations.

No Canadian COVID Deaths for First Time in 6 Months

Can I travel to Ibiza? Traffic light rules explained

We put these eight meme stocks through a rugged analytical test. Which are poised for…

‘Time Cells’ Identified in Our Brains Encode The Flow of Time, Scientists…

Apple’s first VR headset could be an expensive disappointment

WATCH: Joe Biden Told Americans Not to ‘Panic’ About Coronavirus in…

Man United news LIVE: Roy Keane and Gary Neville on what club must do this summer,…

Should Hateful Speech Be Banned?