US President Donald Trump has axed his longtime campaign manager amid sinking poll numbers that showed him trailing further behind Democratic candidate Joe Biden with less than four months to go before the November 3 election.

In a Facebook post on Wednesday, Trump said campaign manager Brad Parscale would be replaced by Bill Stepien, who has been the deputy campaign manager. Parscale will shift to a role focused on digital and data strategy, the president said.

A leadership shake-up had long been rumoured. Parscale was blamed internally for a botched Tulsa, Oklahoma, rally last month that drew a much smaller crowd than he predicted. A subsequent coronavirus outbreak forced Parscale and other campaign officials who attended to self-quarantine for two weeks. 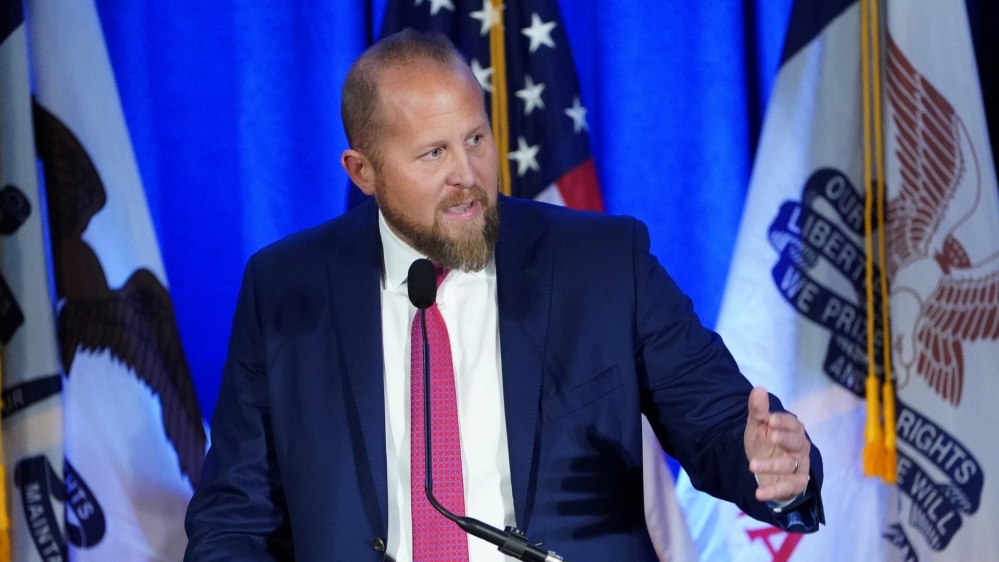 Stepien, a longtime Republican strategist, was political director at the White House before moving to the campaign.

In his statement, Trump credited both Parscale and Stepien for their involvement in his 2016 victory in the US presidential election and predicted that he would glide to a second term in office.

“This one should be a lot easier as our poll numbers are rising fast, the economy is getting better, vaccines and therapeutics will soon be on the way, and Americans want safe streets and communities,” Trump wrote.

The move came as the latest national Quinnipiac University poll showed Biden running 15 percentage points ahead of Trump. That is nearly double the margin Biden had in the same poll last month.

Another poll by NBC News-Wall Street Journal showed Biden ahead of Trump by 11 points among registered voters, while a Reuters/Ipsos poll showed Biden leading by 10 points.

Trump’s standing among voters has sagged this year as the coronavirus has killed more than 135,000 Americans and thrown millions out of work. Biden has blamed Trump for not taking more dramatic steps to curtail the pandemic’s spread.

Plans for his nominating convention in Jacksonville, Florida, remain up in the air with little more than a month before it is scheduled to begin. Republican officials are planning to move most activities there outdoors. Democrats are paring back their in-person event significantly.

Trump advisers have privately levelled criticism that the campaign lacks a central message. The president has offered no substantive policy proposal, opting instead for heated rhetoric on race, crime and socialism aimed at his most loyal supporters. Biden, meanwhile, is releasing a growing number of proposals touching on topics including trade and climate change.

Some Republicans said Trump’s preference to focus more on messaging than a policy agenda reflects the challenge of asking voters for another term amid overlapping public health and economic crises.

“During a re-election campaign, you basically are making the argument that the status quo is really good and that the challenger is insufficient to do the job. And for more than three years, he could credibly make that argument about the economy,” said Mike DuHaime, senior adviser to former New Jersey Governor Chris Christie’s 2016 presidential campaign.

“The problem comes when the status quo isn’t good and there is hard data – both on the economy and with COVID – that shows that,” DuHaime told The Associated Press news agency, referring to the coronavirus.

“That makes it much harder to make an argument about the next four years.”

When asked for the president’s second-term agenda, the White House pointed to Trump’s response to COVID-19 but offered little in the way of specifics.

“As the president continues to lead a whole-of-government response to a global pandemic, restore law and order to our communities, and rebuild the economy,” spokesman Judd Deere told AP, “the White House is engaged in an ongoing policy process for a bold second-term agenda that continues the ‘Transition to Greatness’ that ensures we are a safer, stronger, more prosperous America.”

White House officials also pointed to promises of better trade deals and maintaining law and order, but the lack of details gave Biden’s team an opening.

“This president’s inaction to get the virus under control has cost thousands of lives and millions of jobs. Why should voters continue to let him lead during this once-in-a-generation crisis?” said Biden national campaign spokesman TJ Ducklo. “Don’t ask him, he doesn’t have an answer.”

Free Webinar | July 28: NerdWallet CEO Shares How He Grew an $800 Investment into a $500M Company

Alyssa Milano Rants About ‘How F**ked Up America Is Right Now,’ Supreme…

Inside of world’s largest airship revealed in stunning images

Celtics find the tenacity to come back and win Game 5

What’s Next For Amazon’s Bezos? Look At His Instagram

With McConnell’s Senate abdicating, Pelosi has to figure out how to save the…

Strong debut may not earn Herbert an encore