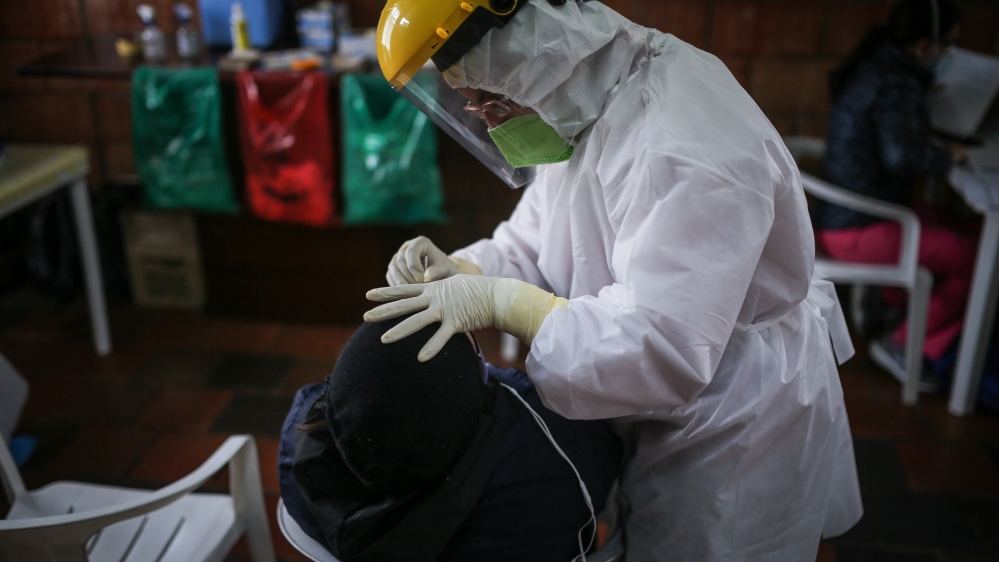 Here are the latest updates.

A surge of 34,884 new coronavirus cases took India’s tally to 1,038,716, as local governments continue to reimpose focused lockdowns in several parts of the country.

The Health Ministry on Saturday also reported 671 deaths in the past 24 hours for a total of 26,273. The ministry said the recovery rate had slightly come down to 62.9 percent.

About a dozen states, including Maharashtra, Tamil Nadu, West Bengal and Assam, have put high-risk areas under lockdowns, only allowing essential food supplies and health services.

Rahul Gandhi, leader of the main opposition Congress party, urged Prime Minister Narendra Modi on Friday to take concrete steps to contain the pandemic. He warned that the number of infections will double to 2 million by August 10 at the current pace.

Experts say India is likely to witness a series of peaks as the infection spread in rural areas.

Authorities in South Korea say most of the country’s new coronavirus cases are coming from abroad.

The officials have expressed optimism that the recent resurgence of infections is being brought under control. They say imported cases are less threatening than local transmissions because South Korea is mandating testing and enforcing two-week quarantines on all people arriving from other nations.

South Korea’s Centers for Disease Control and Prevention said Saturday that at least 28 of 39 newly confirmed cases were tied to people arriving from abroad. It says 18 others involved local transmission in the densely populated Seoul area, which was at the center of the virus resurgence that began in late May as people increased economic and social activities.

In all, South Korea has reported 13,711 confirmed cases during the pandemic, including 294 deaths.

Confirmed coronavirus cases around the world have topped 14 million and deaths have surpassed 600,000, according to a tally from Johns Hopkins University on Saturday.

The World Health Organization reported a single-day record of new infections: over 237,000. Experts believe that the true numbers are even higher.

The United States, Brazil and India top the list with the highest number of cases. India on Friday exceeded 1 million confirmed infections, and Brazil’s cases passed 2 million, including 76,000 deaths, on Thursday.

The number of confirmed coronavirus cases in Germany increased  by 529 to 201,372, data from the Robert Koch Institute (RKI) for infectious diseases showed on Saturday.

The country’s reported death toll rose by one to 9,083, the tally showed.

Mexico’s Health Ministry have reported 7,257 new confirmed coronavirus infections and 736 additional fatalities, bringing the total in the country to 331,298 cases and 38,310 deaths.

The government has said the real number of infected people is likely significantly higher than the confirmed cases.

Hong Kong set new conditions for incoming travellers from countries deemed at high risk for COVID-19, meaning arrivals need an official certificate to prove they have tested negative for the coronavirus before they can enter the semiautonomous city.

The new measures, effective from midnight (16:00 GMT) next Saturday, will affect travellers who have visited Bangladesh, India, Indonesia, Nepal, Pakistan, the Philippines, and South Africa in the 14 days before arriving in Hong Kong.

The policy comes as Hong Kong grapples with a new wave of infections and authorities announced an all-time single-day high of 67 cases on Thursday.

04:49 GMT – New cases drop by half in Australia’s Victoria

Australia’s Victoria state saw a marked drop in new COVID-19 infections – from Friday’s record high of 428 to 217 – a total that Chief Health Officer Brett Sutton says was “a relief after yesterday’s numbers”.

The Health Department said on Saturday that two more people, a man and a woman in their 80s, had died, taking the state’s death toll to 34 and Australia’s national total to 118.

Victorian Premier Daniel Andrews said the latest numbers were encouraging but warned it was just one day.

China’s National Health Commission reported 11 new cases in the far western region of Xinjiang, taking the total number of cases in the capital, Urumqi, to 17.

Authorities in Urumqi have reduced subways, buses and taxis and closed off some residential communities, according to Chinese media reports. They also placed restrictions on people leaving the city, including a suspension of subway service to the airport.

As of Friday, mainland China had 83,644 confirmed coronavirus cases, the health authority said. The COVID-19 death toll remained at 4,634.

Australia’s Prime Minister Scott Morrison cancelled the next two-week sitting of the country’s parliament be cancelled, citing “significant risks” of COVID-19 spread as cases rise in the states of Victoria and New South Wales.

Parliament was due to sit from August 4 to 13 and would not meet again until the next planned two-week sitting starting on August 24.

The US marked a
record number of coronavirus cases on Friday for the third consecutive day, notching 77,638 new infections in 24 hours, according to a tally by the Johns Hopkins University.

The International Monetary Fund (IMF) predicted that the US economy would shrink 6.6 percent this year, pounded by the coronavirus and the lockdowns meant to contain it.

The forecast is actually an upgrade from one the IMF made last month when it foresaw the American economy contracting 8 percent in 2020. But the lending organisation warned that the US economy faces downside risks from a resurgence in COVID-19 cases.

Azerbaijan has extended coronavirus lockdown restrictions, including the closure of its borders, until August 31 after a further rise in the number of infections.

The government said people in big cities, including the capital Baku, would be allowed to leave their homes only with special permission from July 20 until August 5.

Shopping malls, cinemas, restaurants, cafes and museums in those cities remained closed, while beauty salons will be reopened.

01:04 GMT – Trump will not consider a national mask mandate

US President Donald Trump ruled out a national mandate requiring people to wear face masks despite record rises in new coronavirus infections across the United States.

In an interview with Fox News that will air on Sunday, Trump said: “No, I want people to have a certain freedom and I don’t believe in that. No, and I don’t agree with the statement that if everybody wear a mask, everything; suddenly, it all disappears.”

He added: “Everybody was saying don’t wear a mask and all of a sudden everybody’s got to wear a mask and, as you know, masks cause problems, too. With that being said, I’m a believer in masks, I think masks are good.”

EU leaders failed to make headway in negotiations over a massive stimulus plan to breathe life into economies ravaged by the coronavirus pandemic, returning to their hotels in Brussels shortly before midnight to rest and try again in the morning.

Many of the 27 heads declared on arrival for their first face-to-face summit for five months that a deal was crucial to rescue economies in free fall and shore up faith in the EU.

But officials said a thrifty camp of wealthy northern states led by the Netherlands stood its ground on access to the recovery fund in the face of opposition from Germany, France, southern nations Italy and Spain, and Eastern European states.

The proposed sums under discussion include the EU’s 2021-27 budget of more than 1 trillion euros ($ 1.14 trillion) and the recovery fund worth 750 billion euros ($ 85.7bn) that will be funnelled mostly to Mediterranean coast countries worst affected by the pandemic.

Diplomats said the 27 remained at odds over the overall size of the package, the split between grants and repayable loans in the recovery fund and rule-of-law strings attached to it.

As the leaders broke up for the day, Polish Prime Minister Mateusz Morawiecki tweeted that they were divided by a bundle of issues and said it was “highly probable” that they would fail to reach a deal on Saturday or even on Sunday if the summit drags past its scheduled two days.

You can find all the key developments from yesterday, July 17, here.

Omicron Detected In 5 Out Of Nine South African Provinces: Report

The UAE’s Hope Mars orbiter: Here’s 6 things to know about the historic…

10 Ways To Save Money On Groceries At This Period

The best 5 new apps for Android and iOS this week