Turkish President Recep Tayyip Erdogan paid a surprise visit to Hagia Sophia just days before the first Muslim prayers will be held at the Istanbul landmark since it was reconverted to a mosque last week.

In a quick visit billed as an inspection, Erdogan took stock of the conversion work, the president’s office said on Sunday, providing images showing scaffolding inside the building.

The Diyanet, the country’s religious authority, said Christian icons would be curtained off and unlit “through appropriate means during prayer times”.

Authorities said last week the mosaics would be concealed with either curtains or lasers when the first prayers are held.

In an interview with broadcaster NTV, presidential spokesman Ibrahim Kalin said on Sunday some mosaics of Mary and Gabriel that are positioned in the direction of Qiblah, where Muslims face during prayer, would be covered with curtains.

He said other mosaics of Jesus and other Christian figures did not pose an obstacle for Muslim prayers because they are not located in the direction of Qiblah. But he did not say whether they would remain uncovered at all times.

Outside prayers, Hagia Sophia will be open to all visitors and tourists and all mosaics will be uncovered, authorities have said.

It was unclear whether Erdogan planned to be among some 500 worshippers set to attend Friday prayers.

Turkey’s top court paved the way for the conversion in a decision to revoke the edifice’s museum status conferred nearly a century ago. 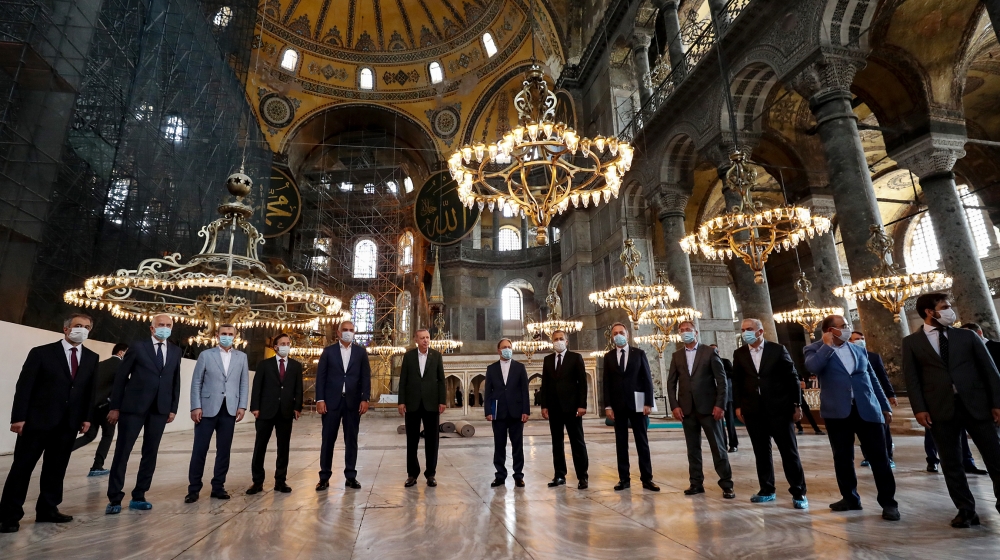 The sixth-century building had been open to all visitors, regardless of their faith, since its inauguration as a museum in 1935.

Earlier this week, the Diyanet said the building would continue to be open to all visitors outside the hours given over to prayer.

The UNESCO World Heritage site was built as a cathedral during the Byzantine empire but converted into a mosque after the Ottoman conquest of Constantinople in 1453.

It was designated a museum in a key reform of the post-Ottoman authorities under the modern republic’s founder Mustafa Kemal Ataturk.

Erdogan said last year it had been a “very big mistake” to convert the Hagia Sophia into a museum.

The reconversion sparked anger among Christians and tensions between historic foes and uneasy NATO allies Turkey and Greece.

What Does Joe Scarborough Think of Al Sharpton’s Anti-Jewish Bigotry?

Do honorifics pass a market test?

Pundit’s blunt view on £3.15m-rated Rangers star must act as stark reminder to…

How the world reacted to Libya ceasefire deal

Here is the 4th Generation Glock: Spoiler, It Will Leave You…