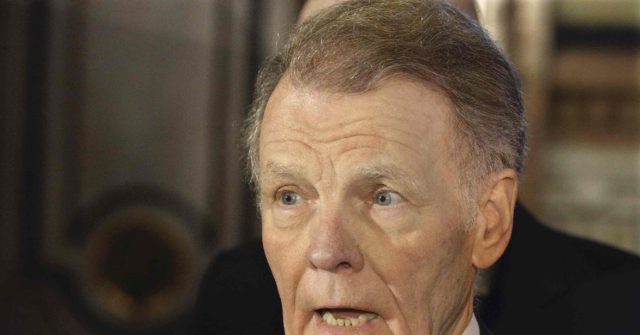 Though Madigan was only identified as “Public Official A” in the announcement, his identity was unmistakable in what federal officials called “old fashioned patronage system,” as ABC 7 Chicago reported earlier:

For most of the last decade the powerful Speaker of the Illinois House, Rep. Michael Madigan, secretly benefited from bribes that electric utility ComEd now admits paying, according to criminal charges filed Friday by the U.S. Attorney in Chicago.

Madigan, a southwest side state representative since 1971, was not charged in today’s filing, but is clearly implicated in the scheme.

Prosecutors state that the person identified as House Speaker Madigan “sought to obtain from ComEd sweetheart contracts and money for himself and various associates “such as precinct captains” who operated in his legislative district.
…

According to the federal information filed Friday, ComEd “corruptly gave, offered, and agreed to give things of value, namely, jobs, vendor subcontracts, and monetary payments associated with those jobs and subcontracts” for the Speaker’s benefit and with “intent to influence” him and his associates.

At a press conference in Chicago on Friday, Lausch said ComEd had agreed to pay a $ 200 million fine — the largest in the history of the Northern District of Illinois. In return, the government would defer prosecution — as long as the company continued assisting with investigations. The deal will have to be approved by a federal court.

Madigan has not been charged in the scheme, which allegedly ran from 2011 to 2019.

Lausch said that the “speaks volumes about the very nature of the problem of public corruption here in Illinois.”

He described some of the favors granted to Madigan, including appointing a preferred candidate to the company’s board, hiring a law firm chosen by Madigan, and hiring interns from Madigan’s Chicago ward.

Madigan is considered the most powerful man in Illinois — more powerful than the governor. He controls the state through the power of a far-reaching patronage system. He has often been accused of corruption but has managed to evade criminal liability.

Colonoscopy After 75: A Potential Lifesaver

My husband wants to buy his sister out of their late mothers $150,000 dilapidated…