US Representative John Lewis remembered at US Capitol

The body of the late United States Representative John Lewis has arrived at the US Capitol where he will lie in state as politicians pay tribute to the longtime Georgia lawmaker and icon of the civil rights movement.

House Speaker Nancy Pelosi led a delegation on Monday to Joint Base Andrews in Maryland to greet Lewis’s flag-draped coffin. A motorcade carrying the body stopped at the Martin Luther King and Lincoln memorials and Black Lives Matter Plaza near the White House as it wound through Washington, DC before arriving at the Capitol, where he became the first Black politician to lie in state in the Rotunda.

Pelosi called Lewis a person of “greatness and was always a person of great humility” and said he often spoke of a vision he shared with the Reverend Dr Martin Luther King Jr of “a community connected and uplifted by faith, hope and charity”.

Speaking at a private ceremony in the Rotunda, Pelosi said Lewis “focused on the future on how to inspire the next generation to join the fight for justice”.

Senate Majority Leader Mitch McConnell said of Lewis: “Even though the world around him gave him every reason for bitterness, he stubbornly treated everyone with respect and love.”

After the Rotunda ceremony, Lewis’s body is to be moved to the steps on the Capitol’s east side for public viewing, an unusual sequence required because the COVID-19 pandemic has closed the Capitol to the general public. Inside the Rotunda and outdoors, signs welcomed visitors with a reminder that masks would be required. 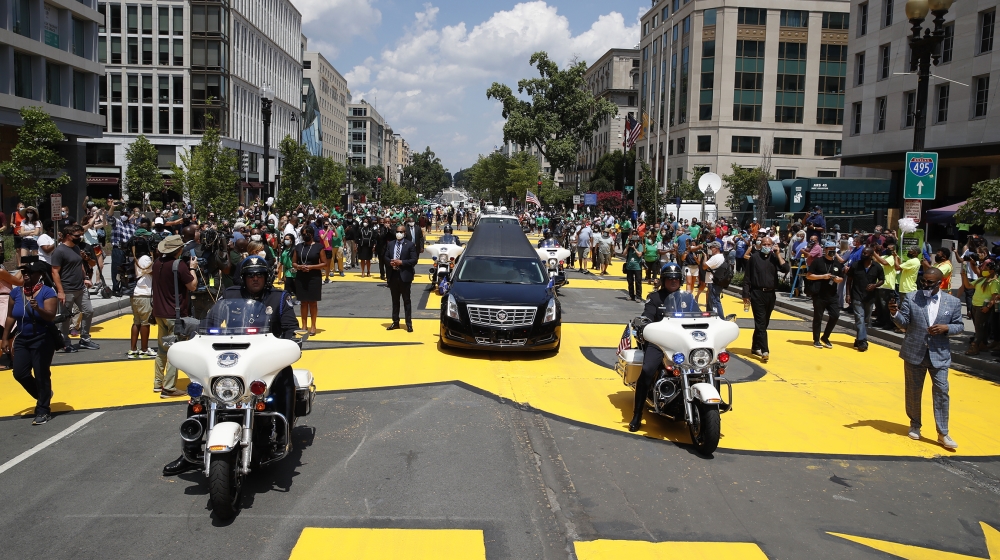 Presumptive Democratic presidential nominee Joe Biden, who served in Congress alongside Lewis, is expected to visit the Capitol to pay his respects. The pair became friends over their two decades on Capitol Hill together and Biden’s two terms as vice president to Barack Obama, the nation’s first Black president who awarded Lewis the Presidential Medal of Freedom in 2011.

Notably absent from the ceremonies was President Donald Trump, who publicly jousted with Lewis. Lewis once called Trump an illegitimate president and chided him for stoking racial discord. Trump countered by blasting Lewis’s Atlanta congressional district as “crime infested”.

Just ahead of the ceremonies on Monday, the House passed a bill to establish a new federal commission to study conditions that affect Black men and boys.

Several members of the Congressional Black Caucus, including Representatives Cedric Richmond of Louisiana, Bennie Thompson of Mississippi and Karen Bass of California were seen sporting “Good Trouble” face masks, a nod to one of Lewis’s favourite pieces of advice.

“Do not get lost in a sea of despair. Be hopeful, be optimistic,” Lewis tweeted in 2018. “Our struggle is not the struggle of a day, a week, a month, or a year, it is the struggle of a lifetime. Never, ever be afraid to make some noise and get in good trouble, necessary trouble.”

The tributes on Monday were the latest in a series of public remembrances for the 80-year-old Alabama native who helped lead the Student Nonviolent Coordinating Committee during the peak of the civil rights era.

The son of sharecroppers, Lewis was among the original Freedom Riders, a group of young activists who boarded commercial passenger buses and travelled through the segregated Jim Crow South. They were assaulted and battered at many stops along the way, by both citizens and authorities. Lewis was the youngest and last-living of the featured speakers for the March on Washington in 1963, where the Rev Martin Luther King Jr delivered his “I Have a Dream” speech on the steps of the Lincoln Memorial. 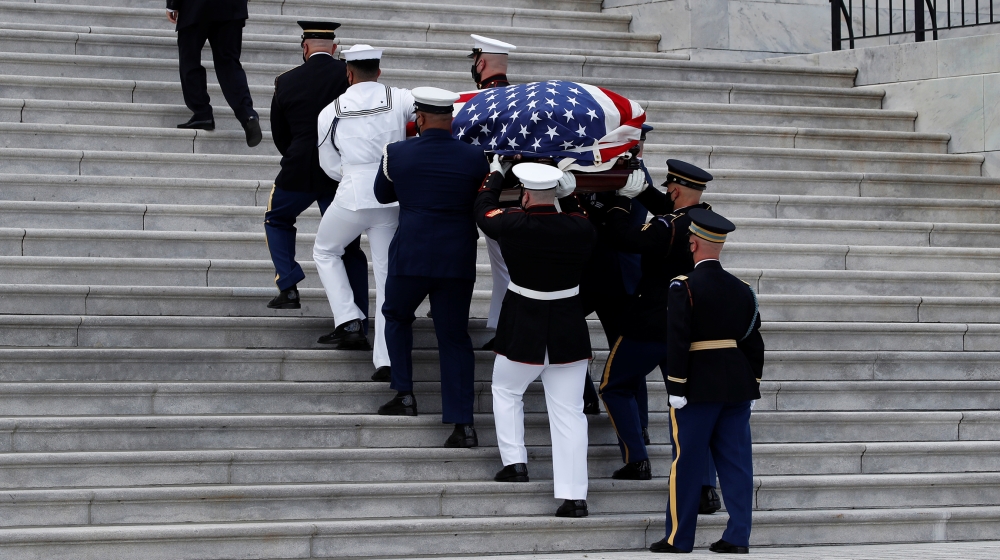 The flag-draped casket of late Representative John Lewis is carried by a joint services military honour guard up the stairs of the US Capitol where he became the first Black lawmaker to lie in state at the US Capitol, in Washington [Alex Brandon/Pool via Reuters]

In Selma, Alabama, on March 7, 1965, Lewis suffered a beating at the hands of an Alabama state trooper that became one of the defining moments of his life. He led hundreds of civil rights protesters who attempted to march from the Black Belt city to the Alabama Capitol to demand access to the voting booth.

The marchers completed the journey weeks later under the protection of federal authorities, but then-Alabama Governor George C Wallace, an outspoken segregationist at the time, refused to meet the marchers when they arrived at the Capitol. President Lyndon Johnson signed the Voting Rights Act of 1965 on August 6 of that year.

Lewis spoke of those critical months for the rest of his life as he championed voting rights as a foundation of democracy, and he returned to Selma many times for commemorations at the Edmund Pettus Bridge, where baton-wielding officers had brutalised Lewis and the marchers.

“The vote is precious. It is almost sacred,” he said again and again. “It is the most powerful non-violent tool we have in a democracy.”

Lewis crossed the Edmund Pettus Bridge for the last time on Sunday on a horse-drawn carriage before an automobile hearse transported him to the Alabama Capitol, where he lay in repose, becoming one of the few citizens who was not a former governor to have such an honour. He was escorted by Alabama state troopers, this time with Black officers in their ranks, and his casket stood down the hall from the office where Wallace had peered out of his window at the voting rights marchers he refused to meet.

Lewis already has had a public funeral in his hometown of Troy, Alabama. He will have a private funeral on Thursday at Atlanta’s historic Ebenezer Baptist Church, which King once led.

Corporate Platitudes that Celebrate the Historically Oppressed Must Be Followed by…

They fought for freedom in Hong Kong. Now, they must find it in exile.

Blitzer Ogles Over Santa Wearing a Mask On NORAD Tracker: ‘Check Out The Mask…

Best Apps of the Week December 11

That Weird, Long Cloud on Mars Has Made a Dramatic Return

A computer predicts your thoughts, creating images based on them

Imagine him & Traore: Villa must secure the next Sanchez in…

Best devices for muscle recovery in the UK