US Republicans unveil plan for another coronavirus stimulus 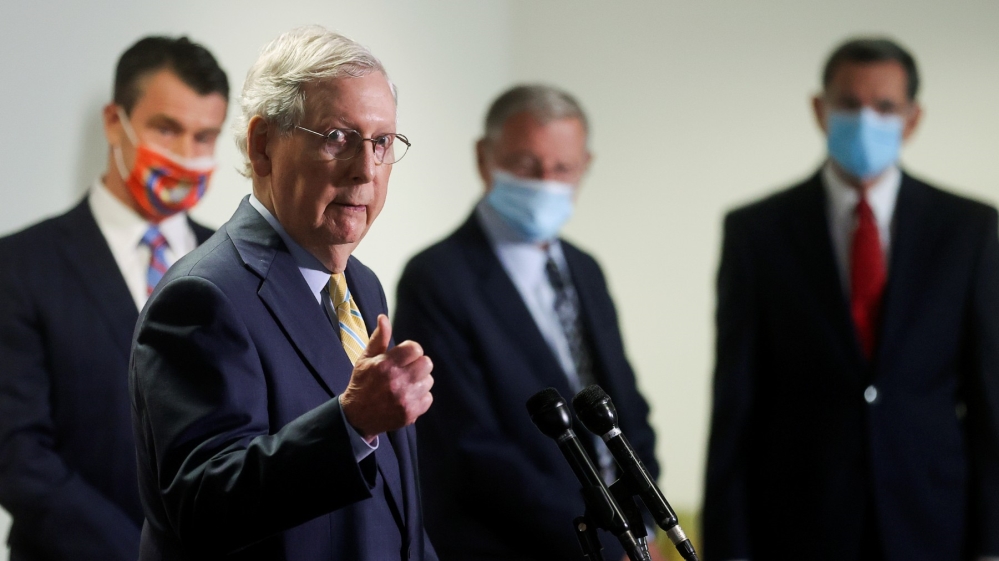 Republicans in the United States Senate on Monday announced their version of a $ 1 trillion coronavirus aid package hammered out with the White House, paving the way for negotiations with Democrats on a plan to help Americans before expanded unemployment benefits for millions expire this week.

Senate Majority Leader Mitch McConnell announced what he called a “tailored and targeted” plan focused on getting children back to school, employees back to work and support for a healthcare system grappling with an illness that has killed 150,000 Americans.

He urged Democrats to compromise with Republicans on the plan, called the “HEALS Act”.

“It will take bipartisan cooperation to make the HEALS Act into law for the American people,” McConnell said, in a speech that also blasted a bill that the Democratic-led House of Representatives passed in May.

McConnell said the plan would include some additional unemployment benefits, but did not say how much. The plan would also provide for direct payments to Americans of $ 1,200 each, as well as incentives for manufacturing personal protective equipment for healthcare workers in the US, rather than China.

The proposal will include “strong legal liability protection” for corporations, a top priority of Republicans, he said.

[email protected]: “Just like in March, with the CARES Act, Senate Republicans have authored another bold framework to help our nation…Health, Economic Assistance, Liability, and Schools. Another historic package for the next phase of this historic national fight.” https://t.co/kk5KR00IXV

An aide to US House Speaker Nancy Pelosi said she would be meeting with Treasury Secretary Steven Mnuchin, White House Chief of Staff Mark Meadows, and Schumer later on Monday to discuss coronavirus relief.

With US unemployment still at a high 11.1 percent and hiring potentially slowing in July, the economy is likely to weaken further without more government aid, economists say.

What is needed, many say, is continued extra aid for tens of millions of unemployed Americans, along with more funding for state and local governments and more grants for struggling small companies, many of which could go out of business.

Yet even with the viral outbreak intensifying and nearly half of Americans whose families have endured a layoff saying they fear those jobs are lost forever, Congress is nowhere close to agreeing on the outlines of a package despite the Republican proposals on Monday.

The debate coincides with worrisome signs about the job market and the economy.

The number of laid-off workers who have applied for unemployment benefits has topped one million every week for 18 straight weeks. Before the pandemic, that figure never exceeded 700,000. Real-time data shows that Americans’ visits to shops and restaurants have leveled off after having grown in May and June. Air travel fell last week compared with the week before.

The Democratic-led House has already approved legislation that would extend the existing $ 600 federal top-up in state unemployment benefits beyond this week, but Republicans have balked at the notion. They point to research showing that, counting the $ 600 a week in federal aid, roughly two-thirds of those out of work are receiving more money from their jobless benefits than they earned at their previous jobs.

The research has fuelled Republican concerns that the extra aid has discouraged some of the unemployed from returning to work, potentially slowing the recovery.

Enter Into the Shattered Pixel Dungeon

Biden Will Press Merkel on China and Russia

Duke University Researchers Showing AI Can Be for the Birds

Waterspouts spotted in the Strait of Georgia, Wednesday

As thousands of Canadians face CERB repayments, Trudeau says not to stress

Louisiana braces for its 3rd dangerous hurricane in only 6 weeks