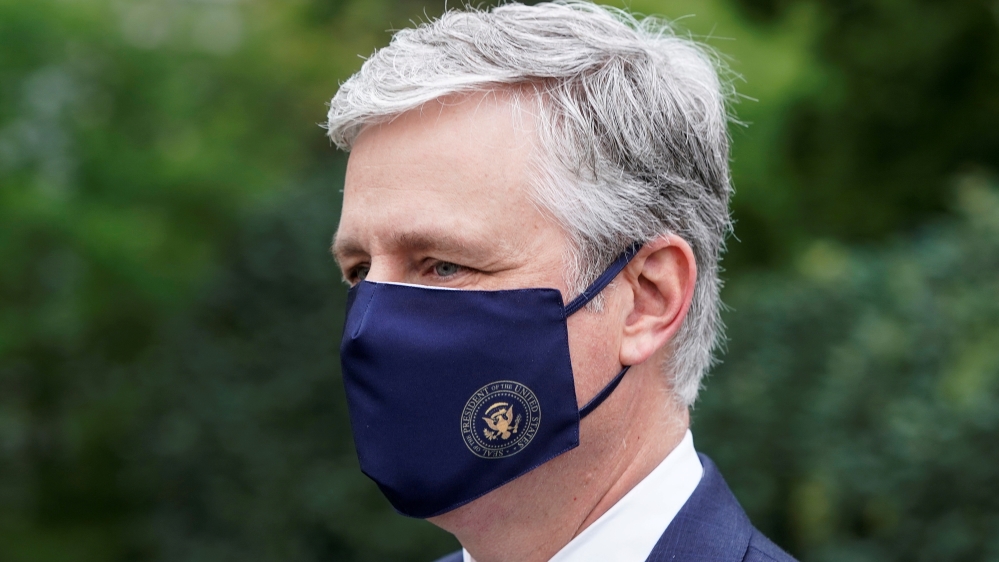 Announcing the infection on Monday, the White House said in a statement there was no risk of exposure to Trump or Vice President Mike Pence.

White House economic adviser Larry Kudlow told reporters on Monday morning that O’Brien’s daughter also has the virus, and that is how they think he was exposed.

“I spoke to him late last week,” Kudlow told reporters at the White House. “I wish him well, I hope he’s OK. Apparently, it’s a light case. I believe his daughter had caught it before him.”

The announcement caught some White House staff off guard, as there had not been an internal memo about it, a source told Reuters.

Because of the regular testing regimen, White House officials do not reliably wear masks while working in the West Wing.

An administration official said O’Brien had not had contact with the president in several days. The National Security Council did not immediately respond to questions about O’Brien, who was working from home.

Previously, Trump’s personal valet and the vice president’s press secretary tested positive for the virus that has now infected more than 4,200,000 and killed at least 147,000 in the US.

The White House statement said: “O’Brien has mild symptoms and has been self-isolating and working from a secure location off site. There is no risk of exposure to the president or the vice president. The work of the National Security Council continues uninterrupted.”

O’Brien, who took over as national security adviser from John Bolton last September, had travelled to Paris in mid-July to represent the US at Bastille Day ceremonies. He met French President Emmanuel Macron while there.

The virus has been disruptive for Trump, who last week was forced to cancel plans for the Republican National Convention in Jacksonville, Florida, where he was to be formally nominated for a second term.

Trump has been criticised for his administration’s approach to the virus, which many view as lackadaisical. The president long shirked face masks, generally accepted as an effective aid to help stop the spread of the virus, and pushed for states to reopen.

Xiaomi device with Snapdragon 865 crushes AnTuTu, is it the Mi 10 Pro Plus?

US plans to require COVID vaccine for most travellers: Official | Coronavirus…

Halo Infinite Will Not Be Held Back By Older Consoles, Claims 343 Studio Head Chris…

Mets’ Marcus Stroman, Pirates’ John Nogowski curse at each other for no…

Cats Are More Likely to Catch COVID-19 Than Dogs, But Cat Owners Shouldn’t…

Democrats Are Using The FEC As A Partisan Weapon