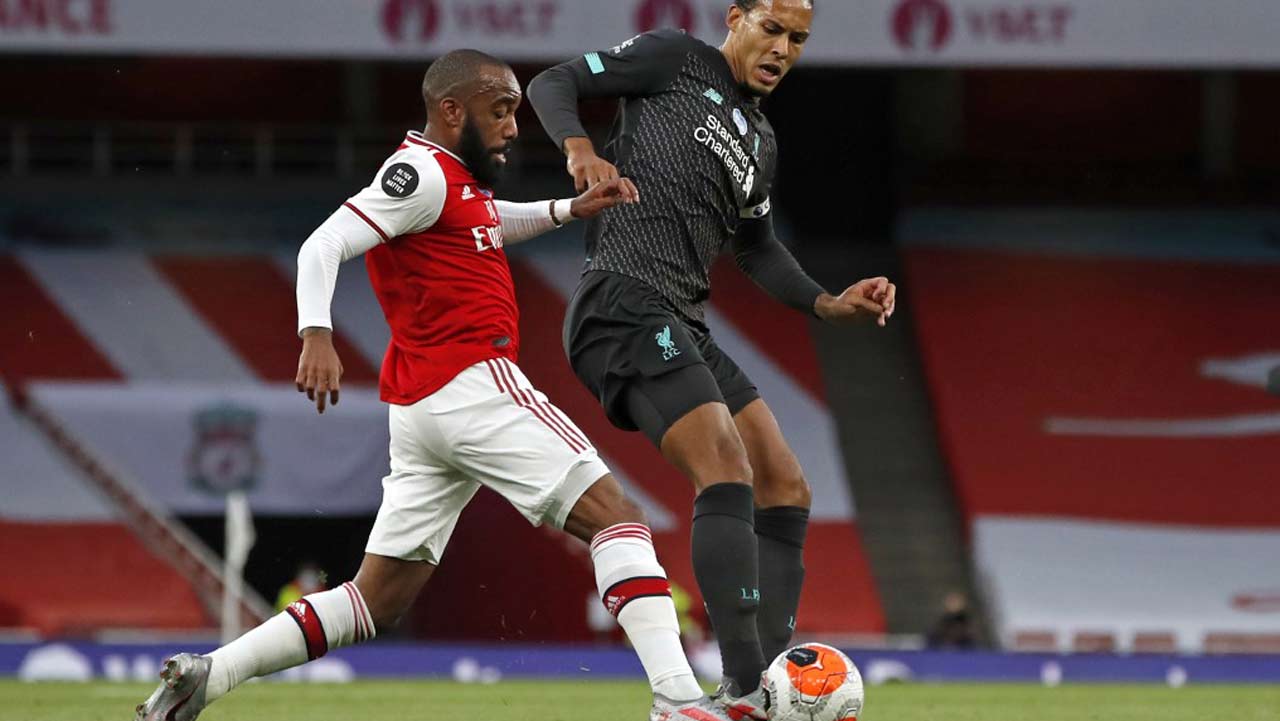 Virgil van Dijk held his hands up to an uncharacteristic error that cost Liverpool the chance to set a new Premier League record points tally as Arsenal came from behind to beat the champions 2-1.

Sadio Mane put Liverpool in front as the visitors dominated for the first 30 minutes at the empty Emirates.

But Van Dijk’s slack pass allowed Alexandre Lacazette to equalise before Alisson Becker also produced a rare mistake to allow Lacazette to tee up Reiss Nelson for the winner just before half-time.

“The goals we give them as a present,” said Van Dijk. “If you give the goals away like we did today, including myself, you get what you deserve.”

Liverpool have now dropped points in four of their seven games since the Premier League’s restart compared to just two prior to the shutdown.

But Van Dijk said there was no shortage of motivation after clinching a first league title in 30 years.

“It’s too easy to say that,” he added. “If you watch the game, until I made the mistake there was nothing wrong. I take the blame for it I take it as a man and we move on.”

Arsenal boss Mikel Arteta’s mind appeared to be already focused on Saturday’s FA Cup semi-final against his former side Manchester City as he left top scorer Pierre-Emerick Aubameyang on the bench among five changes from defeat in the north London derby to Spurs.

But victory kept the Gunners’ chances of European football next season alive by moving up to ninth and within two points of seventh-placed Tottenham.

“To put a defeat away before a semi-final, it’s a good medicine,” said Arteta of his side bouncing back.

“To beat this team you know how many good things you have to have. You have to have moments in the game where you take your chances, you have to defend in many moments they way we did tonight, and you need a bit of luck and today we had all of that.”

Liverpool, by contrast, were at full strength bar the absence of injured captain Jordan Henderson and it showed for the first half an hour as the visitors’ dominated.

Liverpool deservedly took the lead in the 20th minute with a slick move as Andy Robertson provided his 10th assist in the Premier League this season with a low cross that was met on the stretch by Mane.

However, Klopp blamed a lack of concentration after going ahead for two rare slack moments that cost them the match.

“Twice (there was) massive lack of concentration,” said the German. “We did a lot of things well but you cannot win football games when you concede goals like these.”

Lacazette pounced on just Van Dijk’s second error leading to a goal in 88 Premier League games since his £75 million move from Southampton in January 2018 to score his third goal in four games.

The signings of Van Dijk and Alisson transformed Liverpool’s defensive record under Klopp, but the Brazilian then followed his centre-back’s example by gifting away possession to Lacazette and the Frenchman’s cross was dispatched by Nelson for his first Premier League goal.

Liverpool were camped in Arsenal’s half for the second 45 minutes, but found no way through to see the chance of surpassing City’s centurions slip away.

How to Use Announce Messages with Siri on Apple Watch

Where is Death in Paradise filmed?

Improve Your Life and Habits With These Great iOS Apps