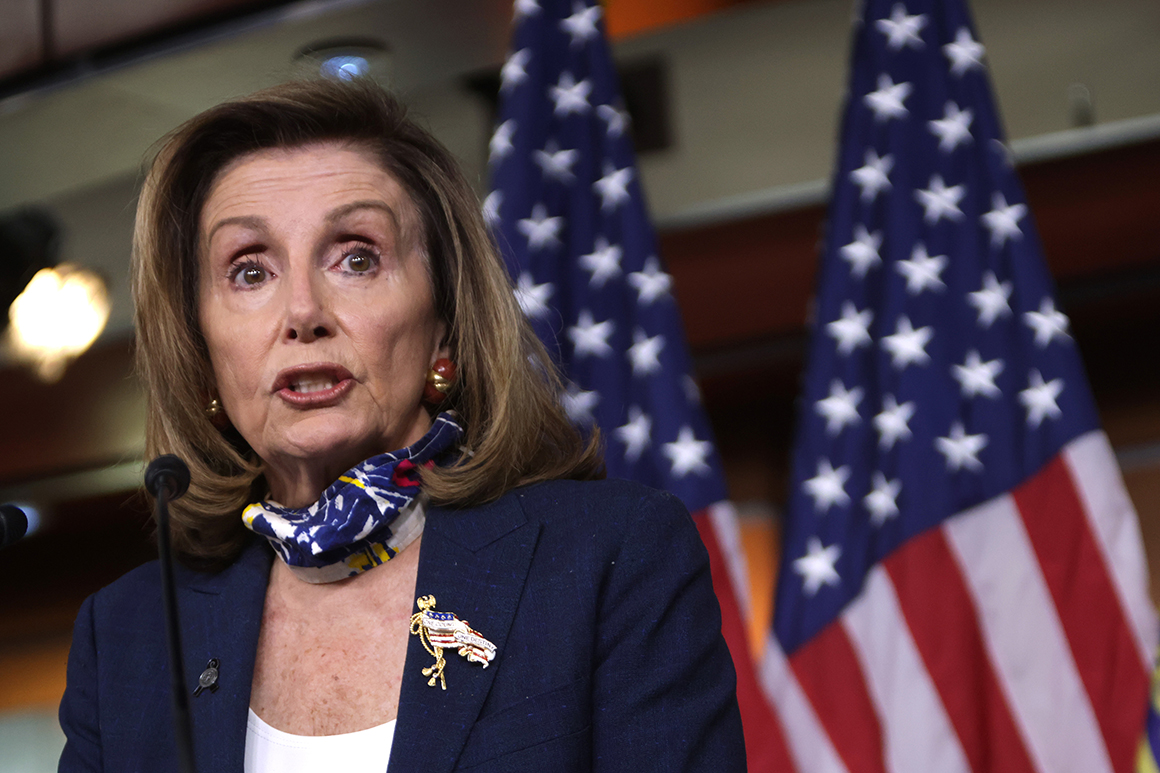 House Speaker Nancy Pelosi rejected the idea of lowering her party’s demands, reiterating that Democrats needed to stand behind their more sweeping legislation as the pandemic rages on. | Alex Wong/Getty Images

Those anxieties — particularly among the Democrats in GOP-leaning districts known as frontliners — have spiked as lawmakers watched the standoff drag out in the Senate this week while they were stuck back home in their districts amid the pandemic. The Senate on Thursday failed to advance a “skinny” Republican coronavirus relief plan over Democratic opposition, leaving senators in both parties to declare negotiations likely on ice until after the election.

Now House members are preparing to return to Washington next week with little prospects for a bipartisan deal, even as coronavirus cases continue to rise and millions of Americans remain unemployed. The House is scheduled to be in session for just three weeks before leaving town until November. But on Thursday, Pelosi dismissed suggestions to change strategies.

“We don’t want to go home without a bill, but don’t be a cheap date,” Pelosi said on a private caucus call. “When you are in a negotiation, the last place to get weak knees is at the end.”

Some Democrats have suggested passing smaller, more targeted coronavirus relief bills in the House, which many hope would stand a chance in the Senate or at least restart talks. But Pelosi (D-Calif.) and Senate Minority Leader Chuck Schumer (D-N.Y.) have rejected that idea, saying it weakens Democrats’ efforts to secure a broader relief package.

Schumer also joined the private call Thursday afternoon and tried to reassure nervous House Democrats after the failed Senate vote. Schumer said he was confident the talks weren’t finished — noting that Republicans have relented in past coronavirus negotiations and would feel pressure to act before the election, though GOP leaders have expressed skepticism of any deal before November. Treasury Secretary Steven Mnuchin, the top administration negotiator, also signaled his lower expectations in comments to reporters Wednesday.

“I think they will come back again,” Schumer said of the White House, according to three Democratic sources on the call. “The weaker they are, the better off we are. And that means the more heat they get and the more that Mnuchin is able to persuade Trump, that if he doesn’t get something done here, it’s going to be certain that he won’t be reelected.”

On the call, House Majority Leader Steny Hoyer (D-Md.) raised the idea of passing another coronavirus relief bill in the House, something several Democrats have privately pushed in recent weeks; they’ve argued it’s better than heading into the final weeks before the election without doing anything further. But Schumer shot that idea down.

“We have to wait for them to come to us, if they don’t come to us — we will not get something your caucus can support,” Schumer said, according to multiple Democrats on the call.

But some House Democrats aren’t convinced the wait-it-out strategy will work and have started to press leadership to take some kind of action, including potentially putting bills dealing with specific aspects of coronavirus relief on the floor so that lawmakers have something to tout to their constituents back home.

Those Democrats argue that the $ 3.4 trillion coronavirus relief bill the House passed in May, known as the Heroes Act, is fading from the public’s memory and the House needs to do something now to show lawmakers are taking action despite the Senate stalemate.

“The currency of that vote is eroding,” Rep. Derek Kilmer (D-Wash.), chair of the moderate New Democrat Coalition, argued on the caucus call Thursday, according to multiple sources. “Hoyer raises a legitimate question — whether we’re willing to adjourn in October with the understanding that help may not come… We want the American people that are hurting the most to know that we are fighting for them.”

Kilmer was among several centrist Democrats who voiced similar concerns about the inaction one day earlier in a call with Pelosi. Some, particularly freshmen, pressed for more votes on coronavirus legislation, such as piecemeal bills to address programs like unemployment insurance, small business assistance or stimulus checks.

Pelosi rejected the idea of lowering their party’s demands both on Wednesday and during the broader caucus call Thursday, reiterating that Democrats needed to stand behind their more sweeping legislation as the pandemic rages on.

“Members range in suggestions to voting on ‘Heroes’ again to hanging tough,” Pelosi said Thursday, according to Democrats on the call. “Most of you agree that if we hang tough, we will get a better bill.”

One idea Pelosi is considering, however, is a floor vote on a standalone bill from House Energy and Commerce Committee Chairman Frank Pallone that would provide $ 75 billion to strengthen coronavirus testing and tracing programs nationwide. Senate Republicans proposed $ 16 billion for testing and tracing in their bill this week.

Other swing-district Democrats say they’re begun to search for more options themselves. Rep. Josh Gottheimer (D-N.J.), co-chair of the Problem Solvers Caucus, has begun drafting bipartisan proposals within that group to amp up pressure on their party’s leaders to accept something short of a full, $ 2 trillion package Democratic leadership is seeking. The GOP bill filibustered in the Senate Thursday amounted to roughly $ 500 billion.

Some members of the bipartisan group have even reached out to the White House about their plan. But senior Democrats say they’re skeptical of the gambit, noting that there is virtually no way to bring that proposal to the floor even if it did have support.

The calls for Democratic leaders to put more coronavirus bills on the floor have been growing for weeks. When the House returned in August to vote on a rescue package for the U.S. Postal Service, several Democrats urged Pelosi to couple that vote with one on broader economic recovery legislation. Pelosi and her team ultimately decided against any additional votes.

Concerns about the inaction have only escalated since then, with party leaders making no progress in negotiations and ultimately halting talks altogether. Pelosi and GOP officials haven’t met in person since early last month and a call between the speaker and Mnuchin last week yielded no results.

At the same time, Democratic leadership is battling discontent on another front — a bill slated for a vote in the coming weeks that would legalize marijuana at the federal level.

Vulnerable House Democrats are furious about plans to vote in roughly two weeks on the bill, which they believe would fuel a barrage of GOP attack ads in the final weeks before the election despite being widely praised as a step toward racial justice.

A majority of Americans favor legalization. But some Democrats, particularly freshmen, have been spooked by recent polling that showed that Trump’s “law and order” attacks had already been taking some toll, with voters — particularly in the suburbs — uneasy about calls to defund the police amid nationwide protests.

Others worried that Democrats would head into the election with their chief message being about marijuana and the rest of their agenda drowned out by Trump, particularly if they leave for recess without a coronavirus relief deal.

“We can’t fund the government, we can’t fix Covid, but yet we can pass weed,” said one Democratic aide, summing up the frontliners’ anxieties.

The bill — which would also create grant programs for people hit especially hard by the war on drugs — initially saw more support within the caucus. But several swing-district Democrats say their thinking changed after weeks of protests, some of which turned violent, and growing calls to defund the police.

A whip count by Democratic leaders this week showed some faltering support, and there has been some early talk among senior Democrats of pulling the bill from the floor schedule.

Collins bleeding support from Republicans in Maine, even former allies

Politics Podcast: Why Republicans Didnt Back The Jan. 6 Commission

What Kind of Bird Is That? The Merlin Bird ID App Can Tell You

Anurag Kashyap shares a glimpse of his Sunday meal

President Joe Biden is bolder, tougher, and more audacious than anyoneleft or…

All inside pictures from Sonakshi Sinhas latest Filmfare cover shoot