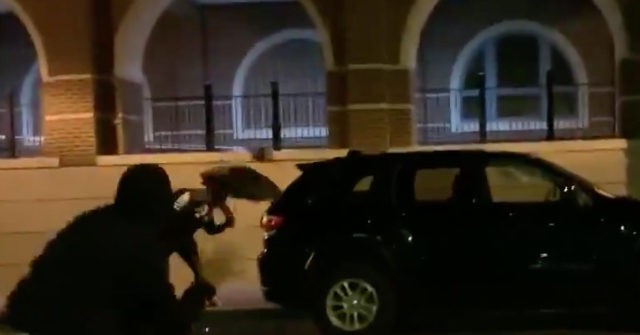 Black Lives Matter rioters in Lancaster, Pennsylvania, smashed county vehicles with bricks and referred to police as the “real KKK” following the police-involved shooting of a man who, as bodycam footage showed, chased a police officer with a knife.

Black lives matter protesters join in and call to light the car on fire pic.twitter.com/3tdCL5zaYi

PENNSYLVANIA: you can see how many projectiles, including water bottles, rocks and brick fragments were thrown at Lancaster police who were clearing the precinct ramp pic.twitter.com/8zLBG3CUcV

PENNSYLVANIA: “let’s shoot them n*gga” a BLM protester yells regarding the Lancaster police

He is rushed away by medics. Current condition unknown pic.twitter.com/ewS7tmm8rX

BREAKING: Antifa has begun breaking the windows of the Lancaster police precinct

Officers are responding with non lethal rounds and are now in the streets pic.twitter.com/icg1rDxxC9

“Murderers,” one protester shouted, as another stated that police are the “real KKK”:

Protesters in Lancaster yell at police who have taken a defensive position. There has not been any violence, just words exchanged pic.twitter.com/oKlVYsNjMC

Footage also shows protesters committing acts of arson outside of the police station:

BREAKING: after partially destroying a police vehicle, black bloc Antifa attempts to light it on fire in Lancaster at a BLM protest pic.twitter.com/Hs5yhuDqTW

PENNSYLVANIA: Arsonists have now begun to light fires in the middle of the intersection in front of the police station pic.twitter.com/dPHTRHPJ6C

PENNSYLVANIA: BLM Rioters end their night with some arson pic.twitter.com/tzLgZUv4vc

The riot followed the police-involved shooting that occurred Sunday afternoon after authorities responded to a domestic disturbance call. The caller told the operator that the suspect was “becoming aggressive” with his mother. Bodycam footage released by the Lancaster Bureau of Police shows the officer approaching the door and speaking to a woman before Ricardo Munoz, 27, made an appearance, charging at the officer with a knife in his right hand, prompting the officer to fire his weapon:

The Lancaster County District Attorney’s Office has opened an investigation of the incident.

The Tell: The stock market could be facing ‘multiple decades’ of ‘deleterious’…

To Roth or not to Roth? Part II

Antibiotic Resistance Has Been Found in Bears in Remote Scandinavia

Mars: Mounting evidence for subglacial lakes, but could they really host life?