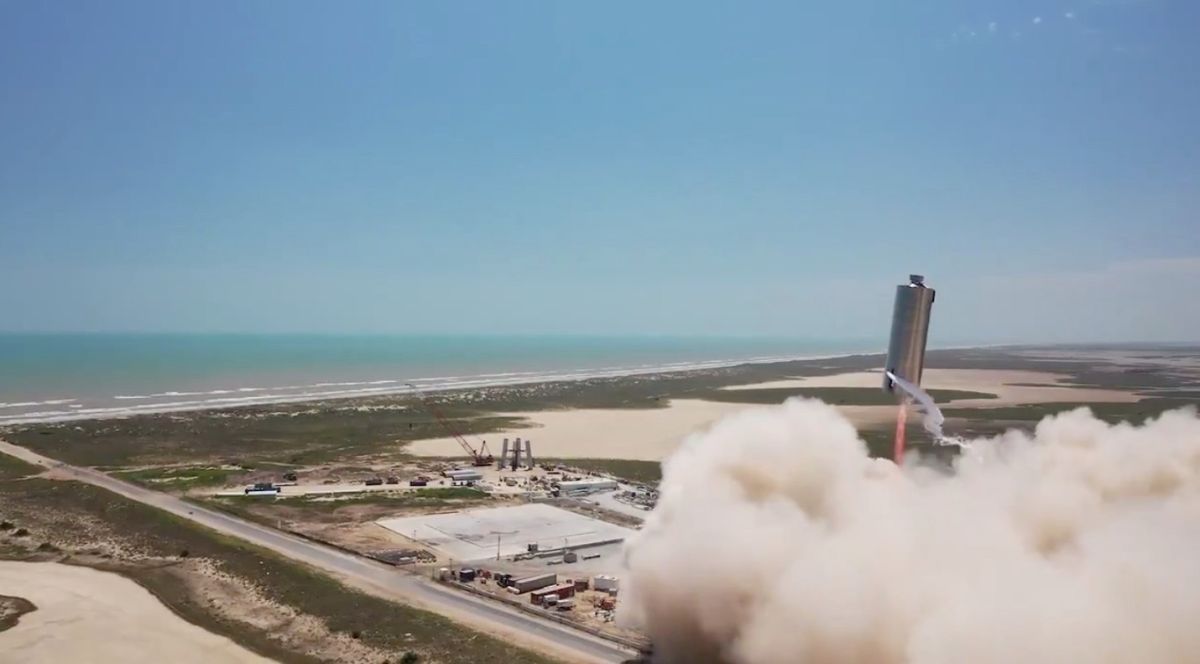 A striking video gives a bird’s-eye view of the recent test hop made by SpaceX’s latest Starship prototype.

The craft, called SN6 (“Serial No. 6”), flew 500 feet (150 meters) up into the South Texas skies on Thursday (Sept. 3), performing the second-ever test flight by a full-size prototype of SpaceX’s Starship Mars-colonizing vehicle.

A day later, SpaceX released a dramatic video showing the uncrewed hop from a variety of angles.

“Turns out you can make anything fly ha ha,” SpaceX founder and CEO Elon Musk wrote on Twitter.

Some of the footage was captured by a drone hovering at about the maximum altitude attained by SN6, some came from cameras mounted on the vehicle itself and a few seconds at the end were obtained by an instrument on the ground.

Turns out you can make anything fly haha https://t.co/FJdHqRdVDbSeptember 4, 2020

The test flight was similar to one conducted last month by SpaceX’s SN5 prototype. Both vehicles reached about the same altitude and moved the same short distance laterally from a launch stand to a landing pad at SpaceX’s facilities near the South Texas village of Boca Chica. But SN6’s hop “was a much smoother & faster operation,” Musk said via Twitter on Thursday.

SpaceX is developing the 165-foot-tall (50 meters) Starship and a giant companion rocket called Super Heavy to get people and payloads to the moon, Mars and other distant destinations. Both vehicles will be completely and rapidly reusable, Musk has said. Super Heavy will be needed to get Starship off Earth, but the passenger craft will be powerful enough to launch itself off the moon and Mars.

The final Starship vehicle will sport six of SpaceX’s next-generation Raptor engines, and Super Heavy will have about 30 Raptors. Three of Starship’s Raptors will be optimized for use within planetary atmospheres, and the other three will be vacuum versions designed for in-space use.

On Friday (Sept. 4), SpaceX announced that the first Raptor Vacuum engine had been shipped from the company’s California headquarters to its development facility in McGregor, Texas.

The first Raptor Vacuum engine (RVac) for Starship has shipped from SpaceX’s rocket factory in Hawthorne, California to our development facility in McGregor, Texas pic.twitter.com/xp2luf6XaISeptember 5, 2020

The chances are “above 50%” that the pioneering Raptor Vacuum engine will survive its initial test runs at McGregor, Musk tweeted on Friday.

SN5 and SN6 are each powered by a single (atmospheric) Raptor, but future Starship prototypes will stack on additional engines. The SN8 vehicle, for example, will apparently have three of the engines, as well as a nose cone and body flaps. SN8 will therefore likely fly much higher than SN5 and SN6 — potentially up to 12 miles (20 kilometers) or so, an altitude Musk has highlighted as a near-term target for the Starship test program.

SpaceX already has one crewed flight on Starship’s docket: Japanese billionaire Yusaku Maezawa has booked the spacecraft for a round-the-moon journey, with a target launch date of 2023. Starship is also in the running to land NASA astronauts on the moon, which the agency aims to do in 2024 as part of its Artemis program of crewed lunar exploration.

Why is the Merkava Tank’s Layout So Strange?

Fallout in corporate America grows over Trump, US Capitol attack

NewsWatch: Americans are draining their checking accounts as stimulus talks drag on

Stanford scientists are creating a ‘superhero’ vaccine based on DNA of…

This guy stars opposite Deepika Padukone in Shakun Batras next

70% of Americans Falsely Believe This About Credit Scores

Dr Dolittle machines: How AI is helping us talk to the animals

A Common Pain Relief Med Used in Pregnancy Should Be Taken…

It’s Not ‘Weakness’ to Change Your Mind…

Astronomers Have Made an Unprecedented Detection of Clouds…