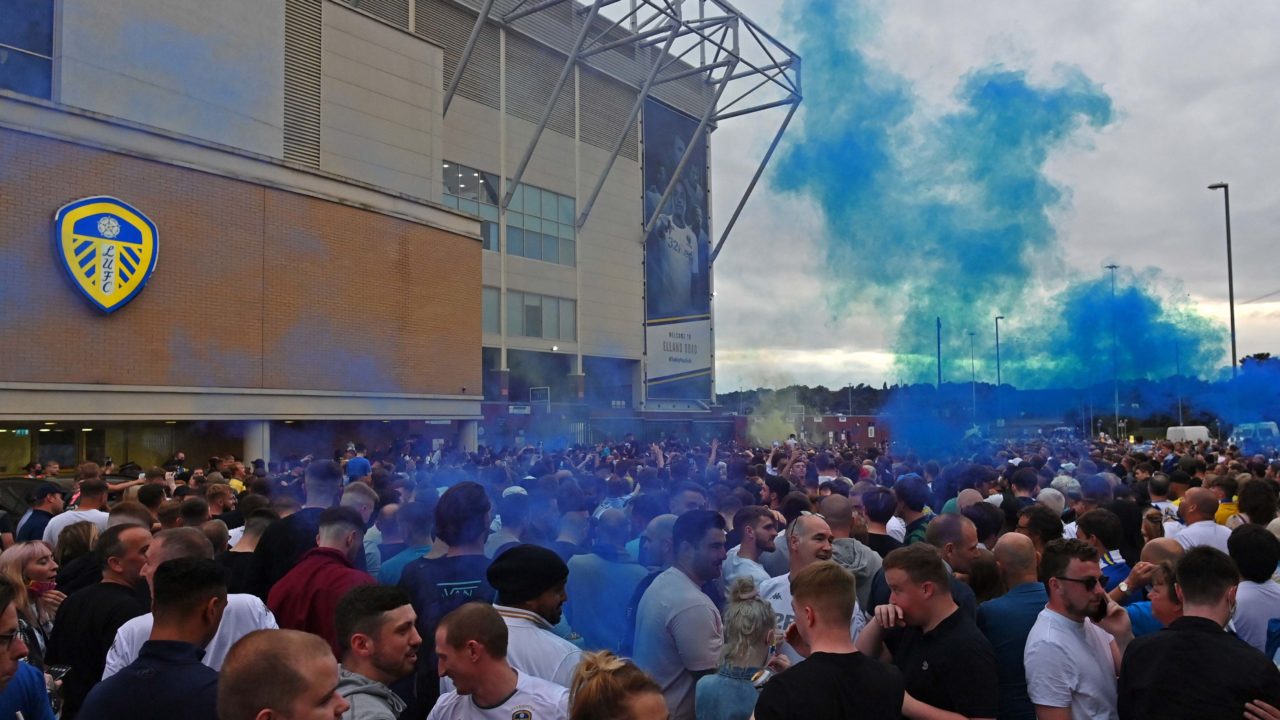 Leeds United supporters gather outside their Elland Road ground to celebrate the club’s return to the Premier League after a gap of 16 years, in Leeds, northern England on July 17, 2020. – Leeds United were promoted to the Premier League on Friday after West Bromwich Albion’s 2-1 defeat at Huddersfield ensured the Championship leaders will end their 16-year exile from the top-flight. (Photo by Paul ELLIS / AFP)

Leeds United were promoted to the Premier League on Friday after West Bromwich Albion’s 2-1 defeat at Huddersfield ensured the Championship leaders will end their 16-year exile from the top-flight.

Marcelo Bielsa’s side were able to celebrate promotion without kicking a ball as second placed Albion’s failure to take three points guaranteed Leeds will finish in the top two.

“We are back. Leeds United are Premier League,” the club said on their Twitter account moments after the final whistle.

Leeds are five points clear at the top and they can clinch the Championship title with a draw against Derby at Pride Park on Sunday.

Albion’s defeat means third placed Brentford will reach the top-flight for the first time in 73 years if they win their last two games.

A tense 1-0 win over Barnsley at Elland Road, secured by Michael Sollbauer’s own goal, had moved Leeds to the brink of promotion on Thursday.

Now they can look forward to renewing old rivalries with Manchester United and Chelsea next season.

“Our club, our fans and our players have sacrificed so much. We’ve been in the doldrums for 16 years.

“To lead this team to promotion back to where we know we’ve always belonged is unbelievable. We deserve it. We’ve been the best team all season.”

Bielsa has earned iconic status in west Yorkshire after the Leeds boss finally put his club back on the football map.

Midfielder Kalvin Phillips saluted Bielsa’s contribution, saying: “When the manager first came in I never thought I would be in this position two years down the line.

“He’s the best in the world. There’s no manager I would rather be under than Marcelo Bielsa.

“The Premier League is the best in the world and after 16 years we’re back in there.”

Despite warnings from Leeds owner Andrea Radrizzani to stay at home amid the coronavirus pandemic, Leeds fans gathered outside Elland Road to celebrate, but their emotion was understandable.

Leeds are one of England’s biggest clubs, with their legion of fanatical fans following them around the country and regularly attracting home crowds of over 30,000 despite years of underachievement.

Their long-awaited return to the top tier completes a turbulent journey that saw them become a laughing stock when they languished in third tier obscurity.

Leeds have been away from the Premier League for so long that Twitter and Instagram didn’t exist the last time they played in the top-flight.

So it was fitting that Leeds goalkeeper Kiko Casilla took to Twitter to celebrate, writing: “We are BACK! We are in the Premier League! Yessssssssssss!

“Many days dreaming of this Day. We deserve it. Proud of this TEAM, proud of our supporters.”

Liverpool midfielder James Milner, who started his career at Leeds, tweeted: “Congratulations LUFC. Back where you belong.”

Leeds went through 14 different managers following their 2004 relegation from the Premier League, until the sleeping giant was awoken by former Lazio and Marseille boss Bielsa.

Bielsa has turned the tide at a tortured club infamously labelled the ‘Damned United’ by novelist David Peace and forever remembered as ‘Dirty Leeds’ in the minds of fans who saw their no-holds-barred style in the Don Revie era.

The 64-year-old Argentine led Leeds within touching distance of promotion in his first season, but they crumbled in the final weeks and were beaten in the play-of semi-finals by Derby.

Notorious for working his players so hard in training that they often burn out by the end of the season, Bielsa has benefitted from the coronavirus hiatus allowing his players to come back refreshed for the final furlong of the promotion race.

Champions of England in 1969 and 1974 under Revie, then in 1992 when Howard Wilkinson called the shots, Leeds have a rich history.

But since being relegated from the top tier, Leeds have stumbled from financial disaster off the pitch to despair on it.

Describing the club’s ascent to the heady heights of the Champions League in the early 2000s, former chairman Peter Ridsdale claimed he had “lived the dream”.

Their subsequent fall was a never-ending nightmare that hit its lowest ebb in 2007 when Leeds went into administration and were relegated to the third tier for the first time.

No wonder the much-travelled Bielsa, nicknamed El Loco for his intense personality, is so beloved after just two years in charge.

Game in Style and Comfort With the Best Gaming Chairs

The most beautiful villages around Portofino and the Cinque Terre

What channel is the NASCAR All-Star Race on today? TV schedule, start time for…

My Conversation with the excellent Ruth Scurr

Siberia’s Current Heatwave Would Be ‘Almost Impossible’ if Climate…

Spurs’ Dele Alli could be sold in January

New analysis shows that Extinction Rebellion were not veteran protesters..

Trump and China respond to UK’s ban on Huawei