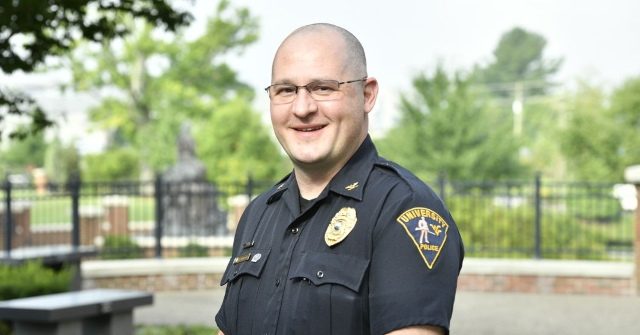 The police chief at West Virginia University was forced to apologize after students noticed a “thin blue line” American flag honoring police on display in his home during a Zoom video conference. The chief apologized to the community after acknowledging the “hurt” his flag caused.

According to a report by Campus Reform, West Virginia University Chief W.P. Chedester apologized last week in response to the outrage that erupted after students noticed a “thin blue line” American flag on display in Chedester’s home during a video conference. The American flag with a blue stripe was created to honor police officers.

Many students called on Chedester to resign in response to the student’s outrage. In a tweet, the university announced that Chief Chedester wanted to apologize to the community for any pain that was caused by the flag.

“During our Campus Conversation today, UPD Chief W.P. Chedester had an American flag with a blue stripe on display. After hearing feedback from our community, he realizes the hurt he has caused and has removed the flag,” the university wrote in a tweet.

During our Campus Conversation today, UPD Chief W.P. Chedester had an American flag with a blue stripe on display.

After hearing feedback from our community, he realizes the hurt he has caused and has removed the flag.

A letter from Chief Chedester: https://t.co/Lvel4bsPih

In a statement published on the university website, Chief Chedester said that the “blue stripe” flag represented his commitment to his work as a police officer. However, he went on to say that he recently learned that the flag is a “traumatic” symbol to some students at West Virginia University.

I participated from my office, and on the wall behind me was an American flag with a blue stripe that I had been given as a gift. For me personally, it has always represented a way to honor the commitment I made as a first responder to protect our community. I understand now that it represents something else to many others; something that I now know was traumatic to some of our community tuning in for our Conversation. I sincerely did not have any intent to suggest that police lives matter more than Black lives nor was I intentionally trying to cause any harm or offense.

Breitbart News reported this week that students called for the termination of Marymount Manhattan College Professor Patricia Simon after she reportedly fell asleep during a video conference on “anti-racism.” Simon claims that she did not fall asleep and that she was merely adjusting her trifocal glasses.

Stay tuned to Breitbart News for more updates on this story.

WHO Advance Team Arrives In China To Find Coronavirus Origin

When lockdown is not actually safer: Intimate partner violence during COVID-19

Why Mental Health is Central to Your Business Continuity Plan

How to Make Your Brand More Cohesive