What does the future of live Theatre look like?

Hannah Smart had achieved her dream of singing on the biggest stages of all, before covid 19 took it all away.   And now she, just like the theatre she grew up loving, is looking at an uncertain future.

The Calgary native had just wrapped up a six month tour singing and dancing in the ensemble for “We Will Rock You” when the pandemic hit.

“For six months I lived out of a tour bus and toured everywhere from New York to L.A and Texas,” she says.  “We did Toronto and Calgary. It was like a dream come true.” 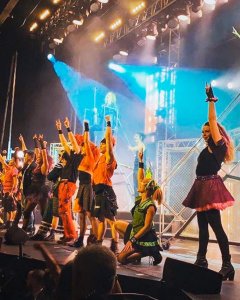 Seven months later, with no idea when she’ll be back on stage, she’s looking at retail or service industry jobs to help pay the rent.

“January and February are kind of the main audition season in Toronto,” she says.  “And so it’s going to be interesting to see what it looks like come 2021 to see if they can even do auditions in person.”

The problem is, nobody knows when theatre productions will start thetheatres will be given the green light to open their doors again.  The situation is so dire, theatre legend Sir Andrew Lloyd Webber pleaded with a UK parliamentary committee to give the industry a set date when they can reopen.

“We are now at the point of no return,” he said.

The biggest hurdle is how to solve social distancing.  A new one-man play in London about covid 19 called “Beat the Devil” starring Ralph Fiennes offers a glimpse as to what the future may hold.  The theatre where the play is running can seat 900, but they’re selling fewer than 300 seats for each performance to keep everyone distanced from each other.

But Lloyd-Webber argues that’s not sustainable for an industry with incredibly thin margins.

John Karastamatis of Toronto’s Mirvish Productions agreed with Lloyd-Webber’s assessment, telling Global News “these large shows can cost up to a million dollars a week to put on.  So you can’t bring in that kind of income at only 30 percent of capacity.  As it is, most shows are budgeted to break even at 80 percent capacity.”

Mirvish had to put some major productions on hold, including the hits “Come from Away”, “Hamilton” and “Summer”.   They’re eager to raise the curtain again so their over 500-hundred actors and theatre staff can get back to work.

But if the federal and provincial governments have any plans in the works, Karastamatis says they’re not privy to them.  And like Lloyd-Webber, Karastamatis says strict rules need to be implemented to allow larger audiences to come back.  He points to South Korea, which saw a handful of theaters adopt strict cleaning measures which so far have been successful.   But even though he wants Canadian theatre to return, he’s hesitant to say what works in Korea will work here.

“(Koreans) accept what is going on and they find ways of continuing life while taking as many precautions as possible,” he says. “We’re not of that mindset.  But you know, slowly people are becoming a lot more accepting (of wearing masks).”

Documents by Readdle app for iOS updated with built-in VPN

More States Are Using Ballot Drop Boxes. Why Are They So Controversial?

US Representative John Lewis remembered at US Capitol

‘How to Die in Space’ explores the dangers of astrophysics

How to Customize Automatic Updates for iOS & iPadOS