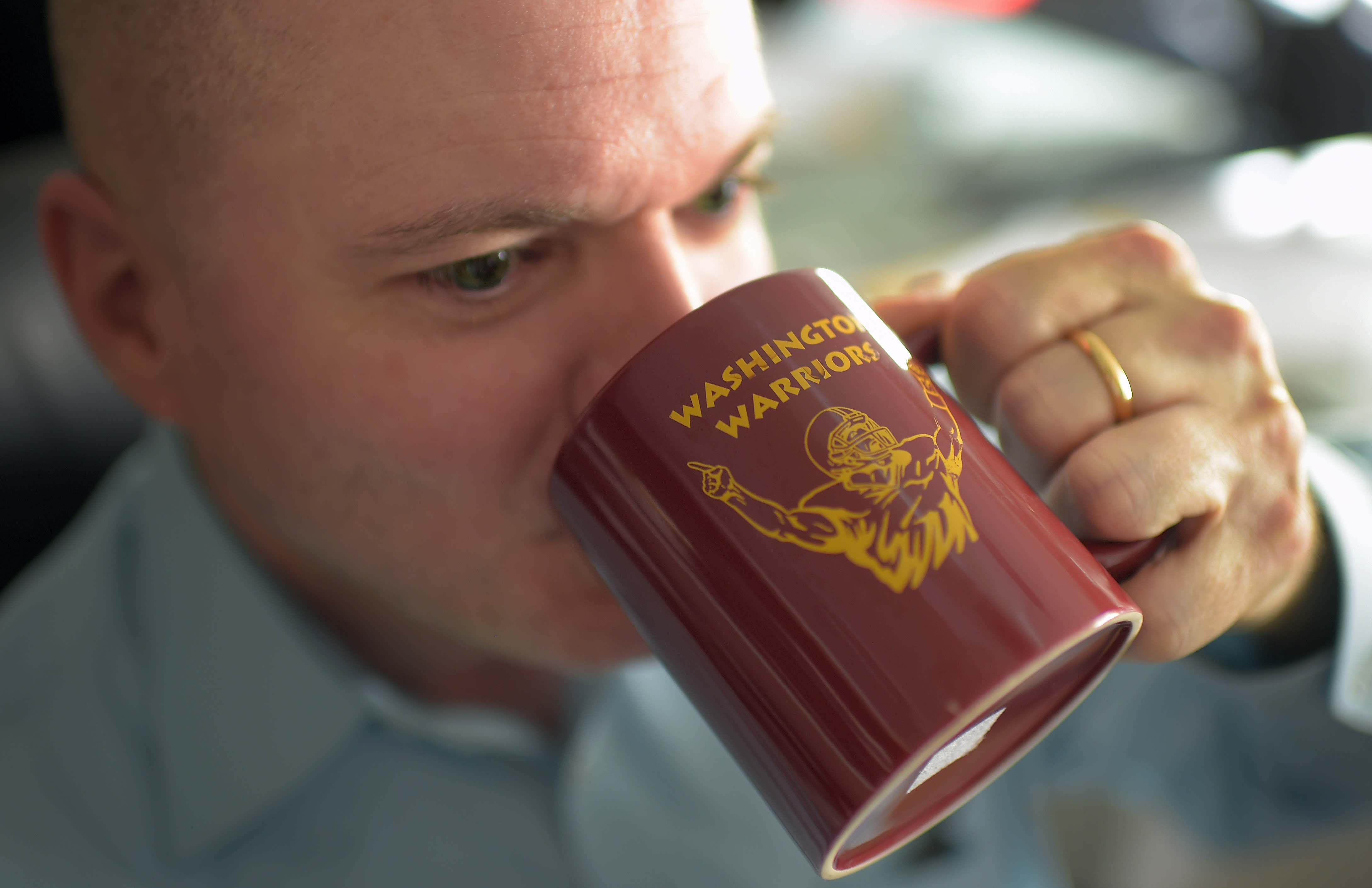 The man who has snapped up the rights to dozens of potential Washington team names insists he no longer is hoping for a payday.

He now says he would give away any of his trademarks for free if it would help accelerate the franchise’s name change.

For the past six years, Martin McCaulay has speculated on how Washington’s NFL franchise might replace its controversial Redskins name. McCaulay has visited the United States Patent and Trademark Office website and forked over $ 275 per application to obtain the rights to names like the “Washington Pigskins,” “Washington Bravehearts” and “Washington Monuments.”

As the death of George Floyd sparked nationwide protests over racial injustice and billion-dollar corporations threatened to cut ties with the Washington franchise, McCaulay has grown more prolific with his purchases. In the past four weeks, the 61-year-old actuary from Alexandria, Virginia, has filed applications to trademark seven different names, including the “Washington Red Wolves,” “Washington Veterans” and “Washington Red-Tailed Hawks.”

In a 2015 article in the Washington Post, McCaulay described his collection of trademarks as a “high-risk investment” that would only pay off if team owner Daniel Snynder cut him a check in exchange for the right to use one of his names. In the wake of Monday’s announcement that the franchise is dropping the “Redskins” name and logo, McCaulay told Yahoo Sports that his purpose now is keeping the rights to new names away from other trademark squatters who might try to extort Snyder.

Pressed to explain his sudden change of heart, McCaulay said he “learned more about the Native American activists who wanted to change the name” and became sympathetic to their cause. He said he reached out to the NFL earlier this month but so far has not heard back regarding his offer to give the Washington franchise his trademarks for free.

“The offer is still out there if they want them,” McCaulay said. “I don’t know what it takes. My first offer was you can have these for free. What do I come back with if they don’t take them? What’s my next move? Do I say I’ll pay you? I just want you to change the name. Will it help if I pay you to take these trademarks?”

It’s difficult to say whether McCaulay realized that some elements of his story come across as too good to be true. He spoke like it wasn’t out of the ordinary to invest thousands of dollars on potential names with no intention of trying to recoup it. Or to give away what amounts to a winning lottery ticket if Snyder seeks permission to obtain one of his trademarks.

“They really need to change the name,” he said, matter-of-factly.

McCaulay is far from the only person filing trademark claims on names Washington might consider. Just this month, a half-dozen trademark claims have popped up in the USPTO database from other people hoping to turn a modest investment into a major payoff.

“Yes, we are aware the Washington Football Team is in a name transition,” she said. “If the team contacted us about using our name, we definitely would be interested. We do believe ‘Washington War Hogs’ does represent the power and history they would be looking for in a nickname.”

She concluded her email with “Hail to the War Hogs,” an apparent twist on Washington’s longtime slogan of “Hail to the Redskins.”

How much legal clout a trademark claim carries depends largely on whether an applicant can show use in commerce in the sector specified. Applications based on intent to use do not become registrations until the owners submit evidence of legitimate enterprise to the USPTO. Someone can’t just file for a trademark they are unable to use and then indefinitely sit on it.

Attorneys who specialize in trademark law said that this issue would doom most squatters if the Washington football team challenged their claims. Even those who took the time to set up a website and hawk merchandise wouldn’t get very far without proof of interstate sales.

The issue for the Washington NFL team is the time it would take for the USPTO to sort through these applications and for the legal process to play out. The franchise hopes to have a new name in place by the start of the upcoming season in September.

What the Washington football team could do — and what many squatters are surely counting on — is to buy their way out of the predicament. Roberts said the franchise could pay an applicant to abandon their trademark application or pay someone with legitimate rights to take over that registration.

DePaul University law professor Joshua Sarnoff will harbor no sympathy for the Washington football team if it has to pay a squatter to obtain the rights to a name. It’s Sarnoff’s stance that Snyder created this problem “by failing to do the right thing earlier and to adopt a different name and obtain trademark rights.”

“How much is a new name worth to the Redskins? Probably hundreds of thousands of dollars, minimum,” Sarnoff said. “So to pay a guy $ 20,000 or even $ 50,000 is chump change compared to hiring lawyers, going through the process and having it take years. The bottom line is it’s much easier to cut a check.”

At halftime of this year’s Super Bowl, two unlikely trademark squatters began chatting about the NFL teams in their respective hometowns.

Thaniel Van Amerongen, a Minneapolis native, is a lifelong Vikings fan. Deron Hogans, who is from Washington D.C., found it difficult to support a team named “Redskins”.

That Super Bowl Sunday conversation served as the catalyst for an ambitious project. The two former design colleagues decided to create “a model for a 21st century sports franchise,” whether by becoming involved in esports, youth sports or pro-am.

The Washington Redtails name appealed to both Van Amerongen and Hogans because of its dual meaning. Not only was the red-tailed hawk sacred to various Native American tribes, the Red Tails was a nickname for the Tuskegee Airmen, the African American military pilots who made their mark during World War II.

Hogans and Van Amerongen insist selling the Washington Redtails name to Snyder’s team was not on their mind in February when they applied for the trademark. They’ve enjoyed seeing their name emerge as a favorite the past few weeks as the pressure increased on Washington to get rid of its name and logo.

“It’s been quite humbling and surprising to see the name in the running,” Van Amerongen said.

Added Hogans, “When we started to make our initial plan for how we wanted to use our trademark, we in no way, shape or form could have imagined this.”

Van Amerongen and Hogans are open to negotiating with the football team if Snyder likes the Redtails name, but it’s no guarantee the two friends will be able to register their trademark. McCaulay filed a notice of opposition earlier this month, arguing that he he already registered a “Red-Tailed Hawks” trademark in 2014 and “Redtails” is just another name for that.

To validate some of his trademark claims, McCaulay operates several websites devoted to his nonexistent football teams.

On Washingtonredtailedhawks.com, users can find information about McCaulay’s trademarks, a rudimentary logo he has designed and a link to buy T-shirts. On WashingtonAmericansFootball.com, there is “information related to the sport of football” — the number of players on the field at one time, the scoring system and the fact that “the team with the most points at the end of the game wins
.”

McCaulay says he has “lost count” of the number of potential Washington team names he has snapped up. He declined to comment on how much money he has spent on trademark fees and merchandise.

Asked how he would like the saga of the renaming of the football team to end, McCaulay once more insisted that he’s not seeking a payday. He wants Washington to choose one of the names that he already has registered for football games and apparel sales because he believes that’s the fastest path to a name change.

“If they have one of those, maybe they can get it done in time for the upcoming season,” McCaulay said. “If they try to get any other trademark, I don’t see how they could do it fast enough.”

Laser Printer vs. Inkjet: Which Is Better?

My mom’s secret lover paid her mortgage. After they split, she met a con artist…

What’s Robo-Advising? And How Can Entrepreneurs Get Involved?

Get an exclusive discount on this great-looking slimline AirTag wallet

watchOS 7: How to enable and use handwashing detection