Whatever Happened To … The Only Brain Surgeon Working In Aleppo From 2014 To 2019? 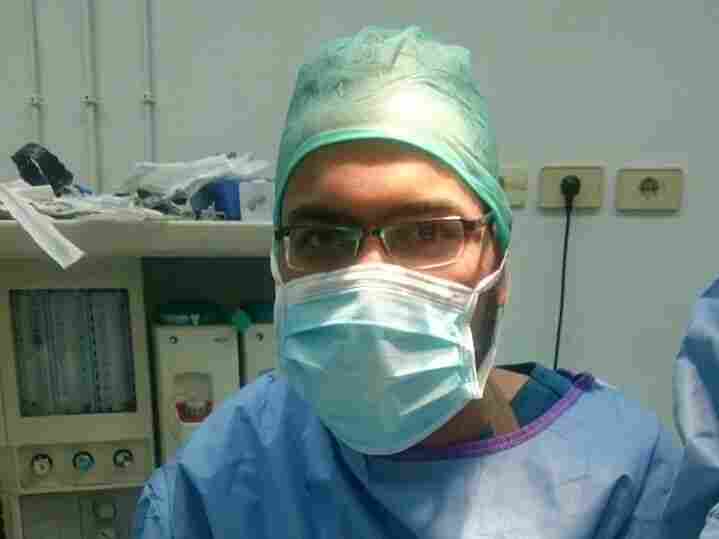 For six years Omar Ibrahim was a surgeon in a war zone. After seeing a call for doctors in Syria, he left Egypt for Turkey and literally walked into the war-ravaged country. From 2014 until 2016 as war raged in Aleppo, he was the only brain surgeon in that city, working in two underground hospitals known as M2 and M10, both funded by the Syrian American Medical Society, an aid organization, and treating the head and brain injuries inflicted by bombs and shrapnel from troops loyal to the Syrian regime.

Goats are curious animals and “Goats and Soda” is a curious blog. Over the next week, we’ll be looking back at some of our favorite stories to see “whatever happened to …”

When Aleppo fell in 2016, Ibrahim was one of the last people to leave on a bus to the northwest province of Idlib, where government forces and their allies were shelling refugees who’d arrived from other parts of the country. That meant more injuries, more bombed and damaged hospitals, more grueling surgeries.

After six years of living with frequent shelling and bombing, with attacks often occuring while he was in the middle of surgery, Ibrahim gained entry to Turkey last fall. His decision to leave Syria was prompted by the arrival of more doctors in Idlib and his recognition that the trauma of six years of treating the injured and the dying was taking its toll on his mental health. “I knew I was feeling traumatized from what I had seen and done,” says Ibrahim, who is now 33.

Penetrating cervical spine injury. Bullet lodged in the anterior arch of C1. This lucky young man has no neurological deficit. Those are the type of injuries we see in #IDLIB #Syria #neurosurgery #UHC @sams_usa @keepark @global_neuro @HarvardPGSSC pic.twitter.com/xFuboTJfVG

NPR interviewed him in Istanbul this week where he is living with friends, preparing for a medical licensing exam and studying Turkish so that he can continue his residency studies in Istanbul. He does have plans to return to “war surgery” though has no set date.

You’ve been in Turkey for about a year now. How are you spending your time?

I have to take a licensing exam in order to practice as a neurosurgeon here, and the exam is in Turkish, a language that is new for me. So, I am learning Turkish and studying for the exam.

If I return to Egypt where I’m from, I could be prosecuted for working with people who opposed the Syrian regime. Although my mother is there [his father died several years ago] it seemed safest to find a new place. When I decided to leave Idlib, I reached out to a Turkish doctor I knew who offered the opportunity to join a university training program. I was only able to enter Turkey after months of paperwork, including help from several aid organizations such as the Syrian American Council.

After six years in Syria, how did you know it was time to leave?

In Aleppo where I was for more than three years, I was the only neurosurgeon. But in Idlib, many more doctors came, and I felt I could leave, and people would still be helped. I always said I would stay as long as I was needed.

I want to continue my education. I was in the middle of my residency when I left Egypt for Syria, and I want to be able to do as much good as I can and help as many people as I can. I contacted a doctor I knew in Turkey, and he sent me an invitation. And then the paperwork began.

You treated hundreds of patients in Syria. Do any of the stories especially stay with you?

Many, but two in particular. During one bombing in Aleppo we had 30 injured patients at one time and all the operating rooms were filled. We were trying to save those patients most likely to survive. I saw a young man who was comatose with many injuries including trauma to the head and one dilated pupil, which could mean there was a brain hemorrhage. We had no CT scanner at that time to be able to see the impact of the injury; I did surgery to relieve the pressure on the brain and operated again the next day and took out a piece of his skull. He came back for a checkup two months later. I didn’t recognize him — because he looked so well and was walking on his own with just some help from a companion — and was shocked that he had survived.

A second patient was a 5-month-old baby girl with shrapnel to the brain. I operated and the next day she woke up from a coma and two days later she was drinking milk.

What are the most important things for people to know about your time in Syria?

I want people to know that this is still happening. I began tweeting when I was in Aleppo because I wanted the world to see the horrors we faced daily in an underground Syrian hospital. I spent nearly six years of my life treating victims of the Syrian war, but Syrian civilians have been enduring this reality for nine and a half years, and still it continues. They have all faced targeted attacks and displacement – the difference now is that they have nowhere to run. There is no other Idlib for them to escape to.

Can you say what you gained from the time in Syria?

What’s ahead for you?

My place is just in medicine. I do not think about changing what I am doing. I am focusing on neurosurgery. I hope to concentrate on low- and middle-income countries, so I can continue to do the most good where it is most needed.

And how are you feeling?

It is a bit frustrating to have to learn a new language, and that will take me about a year more. It can also be a bit isolating, as I am healing from the trauma of war. I run every other day in a park. It helps improve my mood.

Fran Kritz is a health policy reporter based in Washington, D.C. Her work has appeared in The Washington Post and Kaiser Health News. Find her on Twitter: @fkritz.

One protester’s week on the streets in Minsk

Here’s what we learned about aliens in 2020

All work and no play makes a dull setup [Setups]

Galileo Project Will Search for Evidence of Extraterrestrial Technological Artifacts…

A THIRD of Americans hesitant to get COVID-19 vaccine had…

Radiotherapy repairs irregular rhythms in those with…