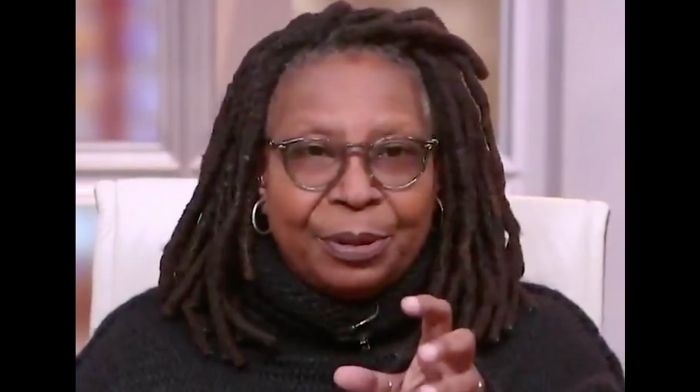 On Monday’s episode of the ABC talk show “The View,” Whoopi Goldberg once again launched an outrageous attack on supporters of President Donald Trump, this time targeting a pro-Trump caravan in Texas.

Goldberg claimed that seeing vehicles that were flying Trump flags surrounding a pro-Joe Biden bus reminded her of a scene out of the movie Mississippi Burning, which was about civil rights workers who were murdered by racists in 1964.

“Over this weekend, truckloads of you-know-who’s supporters took their show on the road across America with caravans that blocked traffic on bridges, did crazy things, surrounding a Joe Biden campaign bus if Texas,”  Goldberg said.

“I’m here to let you know that’s probably one of the most dangerous things you could do because buses can’t stop on a dime,” she added. “Be happy that you drivers didn’t get hit when you surrounded this bus. You could have caused all kinds of havoc. You could have gotten yourselves killed because the buses can’t slow down the way you need them to.”

“Thank God this person saw and slowed in order to let you do what you did, which looked a lot like a scene out of Mississippi Burning,” Goldberg continued. “You know when trucks and cars surrounded people who are trying to drive. It was really freaky to see.”

“Yes, that was very reminiscent of what you were talking about Mississippi Burning,” Behar said. “No, you don’t see Biden people doing that. Biden’s people, the protesters, are tear-gassed as a matter of fact.”

It’s unclear what exactly Behar was talking about when she said that Biden supporters are “tear-gassed.” In saying that “you don’t see Biden people doing that,” Behar is blatantly ignoring the violence that has been perpetrated by radical leftwing groups like Antifa and Black Lives Matter over the past few months. Instead, Goldberg and Behar ignored the facts to continue pushing the baseless narrative that Trump supporters are the violent ones in this country.

This piece was written by PopZette Staff on November 2, 2020. It originally appeared in LifeZette and is used by permission.

Read more at LifeZette:
Electoral College Predictions From Around the Nation
Florida Officials Uncover Massive Election Fraud Scheme To Register Dozens Of Dead Dems As Voters
Trump Dubs Today ‘National Day of Remembrance’ For Americans Who Have Been Murdered By Illegal Immigrants

2020Election: African Americans comes all out to vote.

Euro 2021: Five reasons why England vs. Germany will be must-watch soccer

Serena has tricky US Open path in search of 24th Slam

The 3 Most Likely Paths to Victory for Biden & Trump