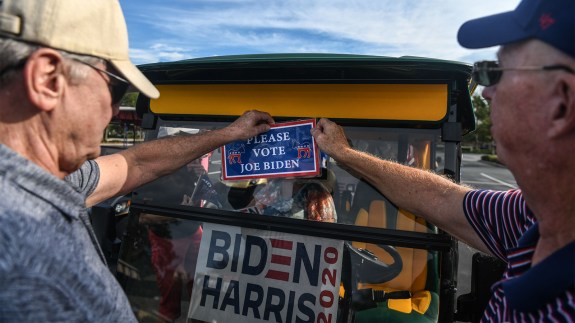 “Most of the activities you normally have here in adult Disney World are closed down,” Bryan Casey told me recently by phone from The Villages, Florida, one of the country’s largest retirement communities. COVID-19 has dulled the normally vibrant social lives of Villages residents, who typically spend their days on eternal summer vacation. The town squares that anchor the sprawling development, usually filled with drinking and dancing and music, have been shut down. “Open The Squares? Look At What Is Happening At The Colleges,” read the headline on a recent letter to the editor at Villages News.

In Sumter County, where The Villages is situated, Donald Trump won 68.3 percent of the vote in 2016, and no other county in Florida had a higher turnout. But, Casey — the communications director of the Villages Democratic Club — said, “I have a couple of friends I know who voted for Trump in 2016 who say that they won’t do that this time.” But few would be willing to admit that publicly. “You’ve got to live here to understand that,” he said.

If that’s the case, Casey’s friends wouldn’t be alone. The pandemic has killed some 190,000 Americans, and 8 in 10 of the deaths reported have been among those 65 or over. President Trump’s delayed and fractured response to the outbreak appears to have reshaped the political dynamics for older Americans. Four years ago, he won voters 65 or over by a margin of 13.3 percentage points. But looking at an average of the nine most recent national polls, voters age 65 or overWhen available, we used figures for likely voters age 65 or over; otherwise, figures are among registered voters age 65 or over.

Who are the older voters abandoning Trump? A look at the polls from 2016 to 2020 shows movement mostly among white voters. But why are they increasingly abandoning him? There’s the pandemic, of course, but I’m not sure that explains everything. An average of six national polls from May — before the beginning of widespread protests against police violence that would come to dominate the news over the summer — showed Trump and Biden tied among voters 65 or over. Perhaps this other national crisis is driving away older Americans. Trump’s inflammatory rhetoric about race and crime could be alienating them as well.

The Villages is perhaps best known, of late, for a viral video of a pro-Trump golf-cart parade (these parades are among the primary modes of political expression in The Villages, since golf carts abound and lawn signs are prohibited). In the clip, first retweeted by the president and later deleted by him, a Trump supporter can be heard shouting “white power” at a group of counterprotesters.

Despite these provocative pro-Trump images coming out of Florida, the shift toward Biden is evident in the state, a key to winning the Electoral College. A late August Quinnipiac University poll in Florida showed Biden leading Trump among older voters, by 54 percent to 44 percent and another late August poll of Florida voters, this one by Public Policy Polling, showed Biden in the lead among the same group,Public Policy Polling figures are among voters over age 65.

“>2 by 52 percent to 47 percent. This stands in contrast to the sentiments of older Florida voters at around this time four years ago. An early September 2016 CBS News poll found Trump leading Hillary Clinton by 8 points among Florida voters age 65 or over, while a CNN/ORC International poll found him with an even bigger, 15-point, lead. And sure enough, on Election Day 2016, exit polls indicated that Trump won this demographic group in Florida by 57 percent to Clinton’s 40 percent.

I asked Jerry Prince, the president of the Villages Republican Club, what he made of the trend away from Trump among older voters. “I think it is false and propaganda by the media and Democrats,” he wrote in an email. “The seniors here have worked hard, retired and remember what Law and Order is and know that what is happening in America today is being denied and pushed by the Democrats. Again, I think this is false and without some true numbers I will continue to believe it is false.”

A recent Quinnipiac University poll conducted following the RNC — an event with the discernible theme that “violence in the largely Black cities of America makes everyone, including white suburbanites, unsafe” — showed Biden leading by 10 points overall. Voters age 65 or over said they supported Biden over Trump by 50 percent to 46 percent, and when asked if Trump made them feel “more safe” or “less safe,” 46 percent said that Trump made them feel less safe; 44 percent said the opposite.

In attempting to speak what he thinks is the language of an older generation of white Americans — racially tinged talk about the destruction of the suburbs, for instance — Trump might actually be shooting himself in the foot. Even as white Americans’ support for the Black Lives Matter movement has waned over the course of the summer, this doesn’t appear to have had a significant effect on Biden’s lead. Voters seem to separate him from the movement even as Trump has tried to tie it to him. (My colleague Perry Bacon Jr. took a deeper look at this issue last month.)

Older white suburbanites, the sort with culturally conservative values who might look askance at the present-day Democratic party, also matured in an America that harshly stigmatized overt racism. These voters might share Trump’s views on race but be turned off by the way he expresses them. Ronald Reagan, the original Republican disrupter of the political status quo, was good at talking to these voters. He’s famous for popularizing the racist trope of the “welfare queen,” for instance, a way to talk about Black Americans in cities under the guise of people abusing a government benefit. His administration’s public-health stance of “just say no” to drugs was largely geared toward suburban voters, a softer way to talk about substance abuse, while the Anti-Drug Abuse Act of 1986 promoted harsher mandatory minimum sentences for possession of crack, a drug largely associated with Black inner-city populations, compared with the punishments for possession of powder cocaine.

Trump’s rhetoric focused on the suburban American idyll might, ironically, be making the people living that dream even more nervous in these nerve-wracking times. He might have been better off sticking with the pandemic — cases appear to be flattening out ever so slightly, though thousands of new cases are reported daily — than with the red meat of racial politics.

‘Joshua making a mistake by looking to Fury’

How To Keep Members Safe When Reopening Your Gym

After Staffer Gives Biden a Note Saying, “Sir, There’s Something on Your…

Just like us: Tiger and Rory play 18 and then grab a burger