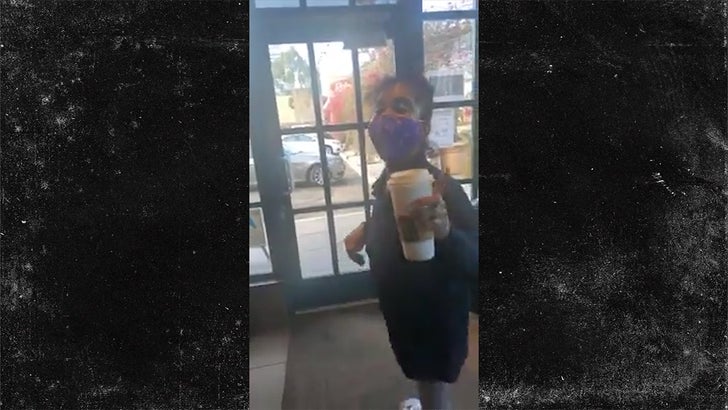 A vile woman verbally attacked multiple Starbucks employees while letting slurs fly left and right … and didn’t stop ranting all the way to her car.

The disgusting incident took place in El Segundo, CA last weekend, and according to the worker who posted the video it was completely unprovoked … and it’s obviously inexcusable regardless.

As the woman’s being escorted out the shop by the barista, she begins to hurl n-words and f-words at him … and is unfazed by the threat of police being called.

The woman then directs her racist and homophobic slurs at the manager, who is also telling her she needs to leave. Not that it matters, but the lady’s tirade seems to be completely nonsensical and ridiculous … especially her gripe about being disrespected.

The barista who shared the video says this woman mistreated one of his co-workers a couple days before this — by calling her an “It” repeatedly — so that barista asked him to take her order because she was uncomfortable dealing with her.

That’s when he claims the customer in the vid began calling the other barista an “It” again, and then went ballistic when they asked her to be respectful.

Though the manager is seen on the video calling the cops on the irate woman, our law enforcement sources tell us the Starbucks later called back and told police not to come because she had left in her car.

US Vice President Mike Pence To Get Covid Vaccine On Friday: White House

No one but Nintendo could’ve made ‘Mario Kart Live: Home Circuit’

Tips on Buying a Beach Condo in Puerto Rico

9/11 Brought NYC Together. Covid Has Helped Divide It

Grounded Continues to Grow: Join Over 5 Million Players Diving into the All-New Koi…

Politics Podcast: The 2020 Electoral Map Could Get Weird