Yes, Jon Gruden was using a cell phone on the field 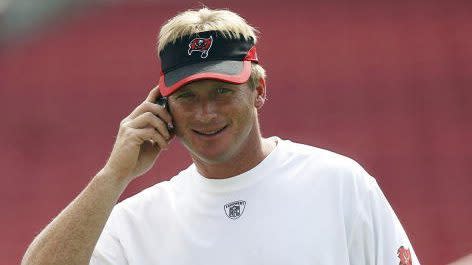 It’s forbidden — and expensive — for coaches to use cell phones during games. Raiders coach Jon Gruden, however, won’t be making an involuntary contribution to the charity of the NFL’s choice for using a cell phone while leaving the field after the first half of Sunday’s game at Carolina.

According to the NFL, Gruden was conducting a two-question interview with the sideline reporter. In any other year, it would have happened with the reporter walking and talking to Gruden.

But it seems that this isn’t the type of thing that should be happening, even under current conditions. It’s our understanding that the networks and teams will get a reminder that the cell phone approach is not an acceptable replacement, even in a pandemic that prevents face-to-face conversations.

Astronomers Thought They’d Found a ‘Calm’ Red Dwarf 11 Light-Years Away. They Were Wrong

Prepaid Revolution part 2: 6 types players in this game and where the puck is headed.

Why are stocks up today?

illuminati hotties Release New Track ‘Threatening Each Other re: Capitalism’

Business Expenses to Re-Evaluate During an Economic Downturn

Games Inbox: Has there ever been a good 3D Sonic The Hedgehog game?