Yoshihide Suga was elected as Japan’s next prime minister by the country’s lower house of parliament on Wednesday, replacing Shinzo Abe who resigned because of poor health and promising to continue his signature economic policies.

The 71-year-old Suga – the son of a strawberry farmer – won the leadership contest of the governing Liberal Democratic Party (LDP) on Monday and was all but assured the top job when his appointment went to a vote in parliament given the party’s two-thirds majority.

After years of economic stagnation and already struggling with the long-term effects of the world’s most elderly population – Japan has been dealt a severe blow by COVID-19.

The world’s third-largest economy shrank a record 27.8 percent from April to June this year compared with the previous quarter due to pandemic-related lockdowns that were only relaxed in late May.

Unlike his predecessors, Suga does not come from a privileged background and rose to the top of the LDP without belonging to any of its powerful factions.

As the face of the Abe government – helming regular news conferences as its chief spokesman – Suga cut a rather dour figure, but has attempted to portray a friendlier demeanour since he emerged as a frontrunner in the race to replace Abe. 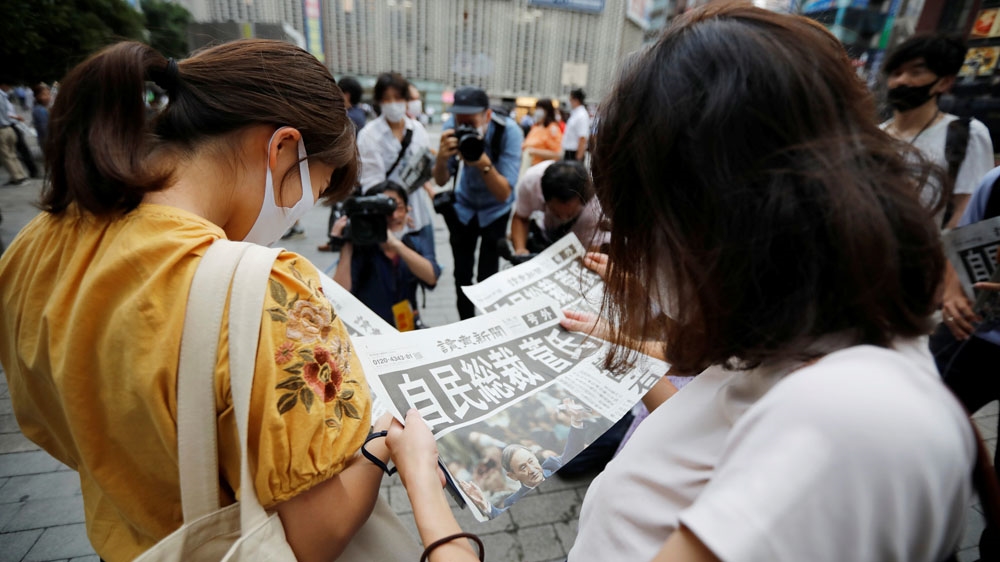 People read extra editions of a newspaper reporting Suga’s victory in the governing party leadership contest on Monday; with the party’s large majority in parliament, he was all but assured as prime minister in Wednesday’s vote [Issei Kato/Reuters]

The fight against the coronavirus will be a priority, but he has also signalled a continuation of the broad policy framework of Abenomics, the three-pronged strategy that was Abe’s signature policy and that involved monetary easing, government spending and structural reform.

He is expected to push forward with his own initiatives, including bureaucratic reform, digitalisation, and helping Japan’s rural communities through policies on agriculture and tourism.

The former Chief Cabinet Secretary and Abe loyalist appointed a new cabinet shortly after he became prime minister, keeping about half of the familiar faces from his predecessor’s lineup.

They include key players such as Finance Minister Taro Aso and Foreign Minister Toshimitsu Motegi, along with Olympics Minister Seiko Hashimoto and Environment Minister Shinjiro Koizumi, the youngest at 39.

Yasutoshi Nishimura, Abe’s point man on COVID-19 response, remains economy minister, while Trade and Industry Minister Hiroshi Kajiyama, the son of a politician to whom Suga looked up as his mentor, also retains his post.

Only two are women and the average age, including Suga, is 60.

Analysts say Suga’s insiders’ knowledge of the complexities of Japan’s bureaucracy and skilful political deal-making from his long tenure as Abe’s righthand man, should help in the formidable challenges that lie ahead.

“Nobody has had as long a tenure as Suga,” Kiyoaki Aburaki, managing director of BowerGroup Asia in Tokyo, told Al Jazeera ahead of the vote. “He knows everything. He knows how government works. He knows how sectionalism has previously prevented change. That is a great asset for him.”

How to Report Bugs to Apple in macOS Big Sur Beta

Why Your Small Business Needs Information Technology (IT)

Are the Astros still feeling the hate these days?

DR ELLIE CANNON: I feel sick when I eat anything sweet… so could it be…

What should I ask Ed Glaeser?

TikTok creators say the Creator Fund is killing their views. Some are leaving

‘Breaking the News’ Reveals How Media Corruption Is ‘Way…

World War I: Why Did Germany Join the Triple Alliance?

Time to Play ‘To Tell the Truth’ With Dr. Fauci